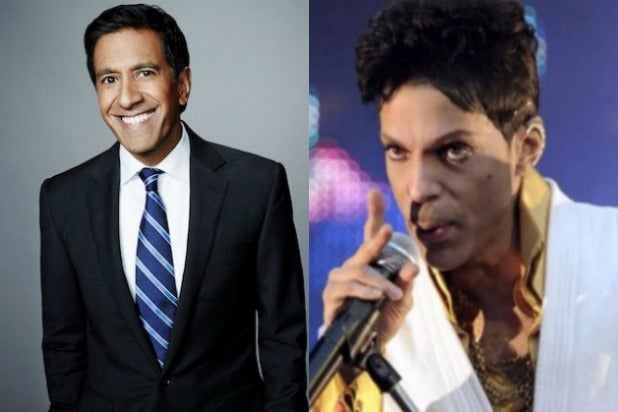 CNN’s chief medical correspondent, Dr. Sanjay Gupta, says he hopes Prince’s death will be a “catalyst” for stopping opiate abuse if the singer did indeed die of an overdose.

“There is no question, any of these overdose deaths – we have one occurring every 19 minutes in this country – all of them can be prevented,” Gupta told TheWrap. He said abuse of opiates is the “No. 1 cause of preventable death in America today.”

Gupta and Anderson Cooper will host a town hall on CNN that will examine the problem with prescription drugs in America. “AC 360 Prescription Addiction: Made in the USA” airs tonight at 9 p.m. ET. Gupta also wrote a powerful op-ed on the subject.

“This is an issue that a lot of people only pay attention to when it’s in the news around some celebrity,” said Gupta, who stressed that “we don’t know for certain what happened with Prince.”

“All we’ve heard, sort of officially from his people, is that he had symptoms of flu, we know that he did receive therapy after the emergency landing in Illinois and it sounded like he was treated for a drug overdose at that point,” Gupta said. “We also know the next day after that he was out and about, even performing, so it’s just still unclear.”

Gupta said even people close to Prince probably didn’t know what was going on.

Also Read: Prince Saw Doctor on Day Before His Death

“Most of the people I’ve talked to that have gone through this, that have had loved ones overdose, even if they’ve survived, almost none of them saw it coming,” he says. “They were totally blindsided and had no idea their loved one was an abuser of opiates.”

“When everyone is paying attention to something because of what’s happening in the news, it’s a really opportunity to provide knowledge. People are hungry for this knowledge,” Gupta said. “We want to make sure we’re filling that gap.”

While the majority of America only thinks about this issue when tragedy strikes, Gupta has been covering it for several years. He produced a successful documentary on the topic and recently spoke with President Obama about the issue.

The human body naturally produces opiates, but it stop producing them when opiate pills enter the system, according to Gupta. If someone suddenly stops taking the pills, the body crashes.

Gupta said that Prince’s emergency landing a week before his death did not appear to simply be a case of withdrawal.

“All we know, and this is from some of the recordings from the plane to the FAA, was that he was not arousable. He was essentially unconscious. That would seem more consistent with someone who may have overdosed more so than withdraw.”

If Prince’s plane made the now-infamous emergency landing because of a drug overdose, Gupta says he found it “a little surprising” that the music icon was left alone at his Paisley Park estate, instead of under the care of a doctor.

“They can’t mandate that a person be observed, but I think common sense for someone who has gone through that sort of an event, if that’s what happened, probably having friends or someone to keep an eye on him makes a lot of sense,” Gupta said. “I did find it a little surprising that he was all alone, considering how sick it sounds like he had been over the previous couple of weeks.”