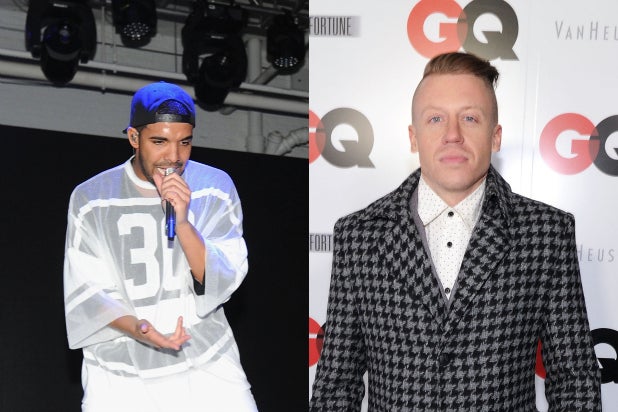 A few weeks removed from the Grammy Awards, and Macklemore’s sore winner apology to Kendrick Lamar is still bugging a third rapper who was in contention for the Best Rap Album trophy.

Drake told Rolling Stone magazine that Macklemore’s text-message apology to Lamar, which the former also posted on his Twitter account, was “wack as fuck.”

“I was like, ‘You won. Why are you posting your text message? Just chill. Take your W, and if you feel you didn’t deserve it, go get better — make better music,'” Drake told the magazine. “It felt cheap. It didn’t feel genuine. Why do that? Why feel guilt? You think those guys would pay homage to you if they won?”

Immediately after the January awards show, Macklemore pinged Lamar to say that the Compton emcee deserved the trophy over the Seattle rapper, who walked away with a ton of gold on Grammy Sunday. Lamar left the show empty handed. In the text, Macklemore apologized to the “Good Kid, m.A.A.D. City” artist and added, “I wanted you to win.”

Drake thinks Macklemore is being a combination of too hard on himself, and more offensively, publicly patting himself on the back for being the bigger man.

“This is how the world works: He made a brand of music that appealed to more people than me, Hov, Kanye and Kendrick,” Drake told Rolling Stone. “Whether people wanna say it’s racial, or whether it’s just the fact that he tapped into something we can’t tap into. That’s just how the cards fall. Own your shit.”

Also, Drake sees it as a slight to the rest of the categories contenders. Those nominated in the Best Rap Album category were Macklemore & Ryan Lewis, Lamar, Drake, Jay Z and Kanye West.

“To name just Kendrick? That shit made me feel funny,” Drake continued. “No, in that case, you robbed everybody. We all need text messages!”

The issue of Rolling Stone hits newstands on Friday. The Grammys aired on Jan. 26.