Ending a year of drama, departures and dealmaking, DreamWorks’ marriage with India’s Reliance Group has officially kicked off, with the two companies announcing on Monday the completion of the studio’s funding.

An initial sum of $325 million, put together by J.P. Morgan, will be matched by Reliance. Including a loan from Disney as part of its newly-formed distribution deal with DreamWorks, the total value of the financing will be $825 million.

The money puts DreamWorks back in the production game. After taking its leave from Paramount months ago, the studio had, as of recently, yet to begin production on any films.

That changed in early August when DreamWorks announced that Steven Spielberg had signed on to direct "Harvey," a Fox co-production which will be the first film under the Disney deal. 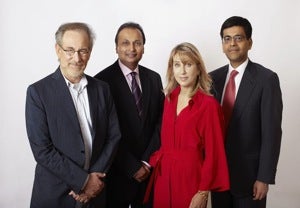 “Our partnership with Stacey (Snider) and Steven is the cornerstone of our Hollywood strategy as we grow our film interests across the globe," Reliance CEO Anil Ambani said. "Given our faith in the business plan that they presented to us and despite the current economic climate, we were always confident that this day would come."

“This will allow us to move ahead quickly into production with our first group of films, said Snider and Spielberg in a joint statement.

Indeed, the funding means DreamWorks could theoretically have three movies in full production by early 2010. In October, filming will begin on "Dinner With Schmucks," a Jay Roach-directed comedy starring Steve Carell and produced with Paramount and Spyglass.

The studio had always said it intends to eventually release about five to six movies annually.

Along with several films in development, DreamWorks in January acquired 17 movies that were launched while the company was at Paramount, including "Cowboys & Aliens"and "The 39 Clues."

Spielberg recently completed directing the 3-D “Tintin” for Paramount and Sony, due out in 2011.

DreamWorks’ deal with Disney, which was finalized in Feb., calls for six live-action films per year. In India, Reliance Big Entertainment will retain DreamWorks’ distribution rights.

Joining Snider and Spielberg on DreamWorks’ Board of Directors on behalf of the Reliance Group are Amitabh Jhunjhunwala, vice chairman, Reliance Capital, and J.P. Morgan’s Alan J. Levine.

DreamWorks, according to a company spokesman, will be staying on the Universal lot.