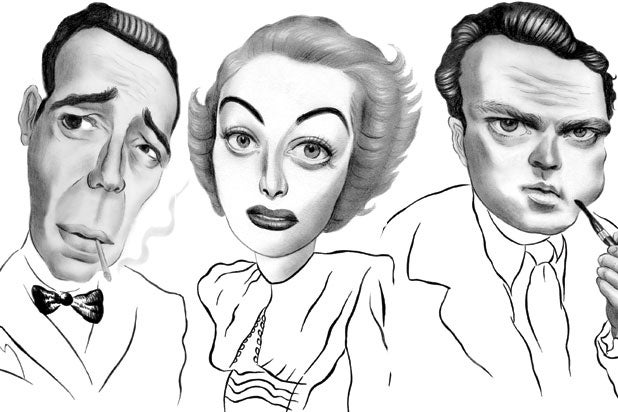 Illustrations from "Of All the Gin Joints: Stumbling through Hollywood History"

“Of All the Gin Joints: Stumbling through Hollywood History” by Mark Bailey with illustrations by Edward Hemingway takes readers on an alcohol-fueled ride with some of the biggest names in show business. Here are excerpts for TheWrap:

It wasn’t a joke, but it damn well should have been. Certainly it began like one: So Humphrey Bogart walks into a bar with two stuffed pandas. Bogart was, by then — September 1949 — the biggest movie star in the world, and he was out in New York with an old drinking buddy named Bill Seeman. They’d been carousing since early, the two of them and Bogey’s wife, Lauren Bacall, but she’d gone back to the hotel hours ago.

(Now needing “dates,” Bogart and Seeman had purchased the large stuffed pandas from a nearby store. At El Morocco, they requested a table for four: two seats for them, two for their pandas.)

If you were to spy Bogart at a nightclub in the wee hours of the morning, propping up an oversized stuffed animal, you might think that it was a not-so-subtle message about the company he preferred to keep. And if you knew anything about Bogart — which you might, since he was more or less the biggest star in the world — you wouldn’t consider yourself in on the joke. But a young model named Robin Roberts thought she was special — as young models often do. She approached Bogart’s table on her way out, laughed, and picked up one of the pandas. And Bogart, given the number of drinks he had put away by this point, happened to be feeling very protective of this panda. So he naturally pulled the panda close to him and told Ms. Roberts to leave him alone, for he was a married man. And then the woman fell over. She said he shoved her. He said she lost her balance. Four days later, he was in a Manhattan courtroom facing legal action.

The panda fiasco immediately hit the tabloids, with Bogart protesting his innocence every step of the way. One reporter asked him if he’d struck Ms. Roberts. He said he would never hit a woman, “they’re too dangerous.” Another reporter asked if he was drunk at the time of the incident. He replied, “Isn’t everybody at 4 a.m.?” Fortunately for Bogart, the judge presiding over the case found it as ridiculous as he did, throwing it out after the first hearing. It turns out, being left alone, when you’re the biggest star in the world, requires a lot of people.

An effective bit of theater, that’s all it was. In December 1939 Orson Welles was the toast of Hollywood, a boy genius from New York hard at work on his first masterpiece. John Houseman from Welles’s point of view, was just his producer, along for the ride. For the last hour they’d been at each other’s throats in the private dining room at Chasen’s, surrounded by six members of the Mercury Players who weren’t really sure how to diffuse the situation.

Welles was pretty lit. He’d been drinking since they sat down and getting more and more agitated, but he wasn’t a violent man. He simply wanted nothing more to do with Houseman. And soon enough, Houseman also wanted little to do with Welles. Then, thunk.

A flaming can of Sterno flew past Houseman’s head (wide left), struck the wall, and landed on the carpet. Houseman turned toward Welles. Thunk. Another Sterno, wide right this time — and now the curtains were on fire.

(The argument was over the financial problems threatening the Mercury Players and what Houseman saw as Welles’ ballooning ego. Houseman then quit.)

But within a few months, Houseman was back in the fold. Welles needed someone to keep (“Citizen Kane screenwriter Herman J.) Mankiewicz sober while Mank hammered away on the first draft of  “Citizen Kane.”  By offering the job to Houseman, Welles could appear both gracious and loyal, while avoiding any substantive contact with his once-trusted producer.

Houseman had the last laugh, though. He and Mankiewicz spent the next three months together writing, and at some point the Chasen’s incident was mentioned. Of course, Mankiewicz felt he just had to put that into the script; it became Kane’s furniture-smashing fit, the scene after his wife walks out on him. Ironically, many consider it Welles’ finest performance in the film — but he scarcely had to act at all.

There would be a few requests forthcoming, but know this: “Miss Crawford is a star in every sense of the word,” the document read. “You do not have to make empty gestures to prove to Miss Crawford that she is a star of the first magnitude.”

In 1964, Joan Crawford’s film career had been sputtering for a couple of years. The brilliant “Whatever Happened to Baby Jane?” was her last major role. She continued to work, but her recent movies had been campy horror thrillers aiming to capitalize on Baby Jane. For one strange gig, she actually replaced her daughter Christina, thirty five years her junior, on four episodes of a soap opera (“The Secret Storm”) while Christina was on sick leave. The event would make it into “Mommie Dearest.”

And so, with her movie career stumbling toward self-parody, Crawford focused on her responsibilities as a global representative and board member of Pepsi Cola, the company at which her late husband, Alfred Steele, had climbed to the rank of CEO before his death in 1959. This meant a lot of traveling. And wherever Crawford went, she took “The Document” with her — a set of instructions sent to hotels in advance that outlined her demands as a privileged guest and her guidelines for hotel staff behavior.

(She carried her own alcohol stashed within the 28 pieces of luggage, but that wouldn’t be all she’d want.)

Also read: ‘Interstellar’ May be a ‘Cli-fi’ Classic (Guest Blog)

“The Document” went on to outline her additional alcohol requirements: “Two fifths of Smirnoff 100-proof vodka. One fifth Old Forester bourbon. One fifth Chivas Regal scotch. One fifth Beefeater gin. And two bottles Moët & Chandon champagne.” And she would need a whole new set for each stop of her travels.

After Steele’s death — especially during the filming of “Baby Jane,” when drinking was practically part of the production schedule — Crawford’s intake had reached new heights. And now it seemed she had figured out a way to put it all on the Pepsi tab. It worked for a solid decade, though not without ever-increasing protests from her husband’s replacement, Donald Kendall, whom she playfully nicknamed “Fang.”

In 1970, on the exact day that Crawford reached the mandatory retirement age of 65, Fang announced her retirement. She would learn about it in what was an altogether different kind of document — the newspaper. It was the end of a remarkable run.

BIO TheWrap Staff
Mark Bailey is an author and Emmy-nominated screen­writer. His previous books include "American Hollow," "Hemingway & Bailey’s Bartend­ing Guide to Great American Writers," and the children’s book "Tiny Pie." His films have appeared on HBO, PBS, and Lifetime. Bailey lives in Los Angeles with his wife and three children. To learn more about his work, visit www.markbaileywriter.com.

Mark Bailey is an author and Emmy-nominated screen­writer. His previous books include "American Hollow," "Hemingway & Bailey’s Bartend­ing Guide to Great American Writers," and the children’s book "Tiny Pie." His films have appeared on HBO, PBS, and Lifetime. Bailey lives in Los Angeles with his wife and three children. To learn more about his work, visit www.markbaileywriter.com.