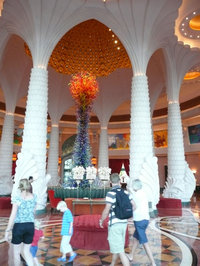 Here’s something I didn’t expect about Dubai: it doesn’t feel very Arab. Most of the faces you see on the streets and in the malls are non-Arab. My cab driver is Ethiopian. My waitress is Philippine. The hotel security guard is Pakistani. Only every so often do you see a figure in a flowing white dishdasha, sweeping through the mall, a keffiyah pinned up by his ears, and a wife in abaya – two eyes through a keyhole – in tow.

Officially, 80 percent of the 4 million residents of the United Arab Emirates are non-nationals, and unofficially some say it’s as high as 90 percent. And because the country barely existed before 1960, there’s little indigenous culture. Much of the city’s architecture is drawn from elsewhere, while being conceived on a grand scale. This leaves the impression on the order of Las Vegas meets Arabian Nights. I spent yesterday on a four hour tour of five-star hotels, gleaming new shopping malls and a host of unfinished construction projects. That included the Jumeira Palm, the manmade island in the shape of a palm tree where Dubai has built a solid mile of luxury apartment buildings, and high-end villas. At the tip, the Atlantis hotel has just opened, and still construction goes on. 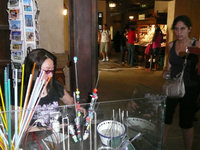 What can you say about a society that has decided to create not just one island out of sand and stone in the shape of a palm tree — but three of them? And more manmade islands in the shape of the continents? And another, in the shape of the Milky Way, if the sheikh feels like it? That’s the vibe of this place: anything is possible if the sheikh – that would be Sheikh Mohammed Bin Rashid Al Maktoum, the ruler of Dubai – says it is. And the sheikh is in a big hurry. Everywhere you look is scaffolding, or a modernist curve jutting out into the sky, or the concrete pylons of the above-ground monorail, public transportation that should be ready to go by next year. I have a film that shows what I’m talking about. (It’s giving me technical trouble, but I hope to post it later.) The place hums with activity, and loads of upscale Westerners in working clothes, not on vacation. Will post later about how women fare here, given the extreme conservatism of other parts of this region.