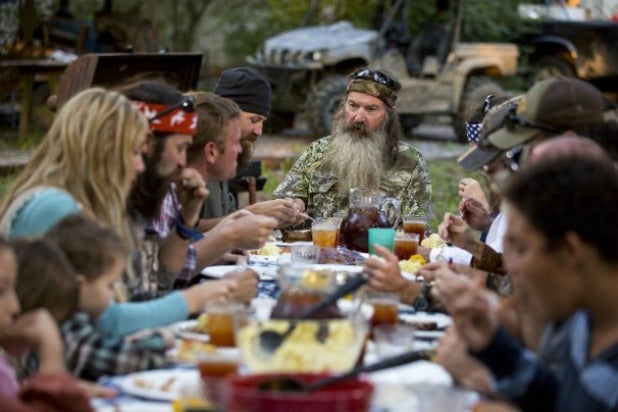 Writing about “Duck Dynasty” star Phil Robertson’s anti-gay views, I’ve received many messages this week from people telling me what a sin homosexuality is.

I’ve read that gays are defiling their bodies, that they want to indoctrinate kids, and that God is punishing them.

If these sound like your beliefs, a question: Are you overweight?

No offense, but some of you probably are. A third of American adults are obese. And almost all of the fattest states are in the Bible Belt.

That’s interesting, because the Bible contains about three times more exhortations against gluttony than against homosexuality.

“Be not among drunkards or among gluttonous eaters of meat,” says Proverbs. “And put a knife to your throat if you are given to appetite.”

If gluttony is a sin, and prayer is the answer, it seems strange that the most religious part of the country is also the most obese. It makes me wonder how people are supposed to pray away the gay when so many Americans can’t pray away fat.

Religious leaders hardly ever speak out against obesity the way they do against homosexuality. Maybe they don’t want to insult one-third of their congregants. It’s easier to pick on gays, a group estimated to make up 10 percent or less of the population.

Or maybe conservative Christians take it easy on those who have committed the sin of gluttony because they’re exercising basic kindness, or understanding, or empathy. Good for them.

Can I get personal a minute? When I was a kid, I was indoctrinated into a world of sin. A mysterious cabal – one that spent $4.6 billion last year trying to recruit people like you and me – lured me into the temptations of fatty foods.

Being fat was embarrassing and isolating. It was painful to know that no matter what I said or did, or how good a day I was having, someone could make me feel like less of a person by pointing out how fat I was.

If fat kids have it hard, I’ll bet gay kids have it a lot harder. At least fat kids don’t have to worry about their church or elected leaders telling them they’re sinners. In fact, when I went to church, we had cookies and juice and sometimes ice cream afterwards. And there was a bakery next door.

Some people have written to say God is using AIDS to punish gay people. Huh. If you truly believe in a Joffrey God who punishes people with physical ailments, what do you make of the fact that obesity is a leading cause of preventable death in our country?

The Bible says gluttony is a sin, after all, and gluttony leads to obesity, and obesity leads to preventable death. So when someone dies of a heart attack, is God punishing him for eating too many nachos?

As any overweight person knows, there’s a big genetic component to obesity. If God made us in his image, he made some people in a way that makes it hard for them to lose weight. They’re born this way.

And we shouldn’t cast stones at people because of how they’re born, right?