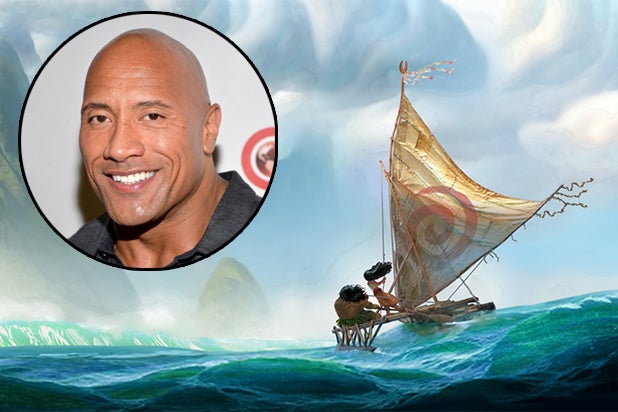 Dwayne “The Rock” Johnson is in talks to voice Maui, a demi-god who aids a young girl on a nautical adventure, in Disney’s “Moana,” an individual with knowledge of the project told TheWrap.

“Moana,” a CG-animated comedy-adventure from “The Little Mermaid” team of Ron Clements and John Musker, is set in the ancient South Pacific world of Oceania. Moana, a born navigator, searches for a fabled island and her incredible journey teams with her hero, the legendary demi-god Maui, as they traverse the open ocean on an action-packed voyage, encountering enormous sea creatures, breathtaking underworlds and ancient folklore.

The coveted role of Moana has not yet been cast, and Disney had no comment on Johnson’s potential casting, which is not official yet as there’s no deal in place. There has been speculation about Johnson’s involvement with “Moana” on several movie blogs.

“Moana is indomitable, passionate and a dreamer with a unique connection to the ocean itself,” Musker said. “She’s the kind of character we all root for, and we can’t wait to introduce her to audiences.”

“Moana” will be Johnson’s first voice-over role since 2009’s “Planet 51.” The actor is best known for his action roles in franchises like “Fast and Furious” and “G.I. Joe.” He’ll next star in earthquake actioner “San Andreas” and play villain Black Adam in DC comic book adaptation “Shazam.”

Johnson is represented by WME and Gang, Tyre, Ramer and Brown.