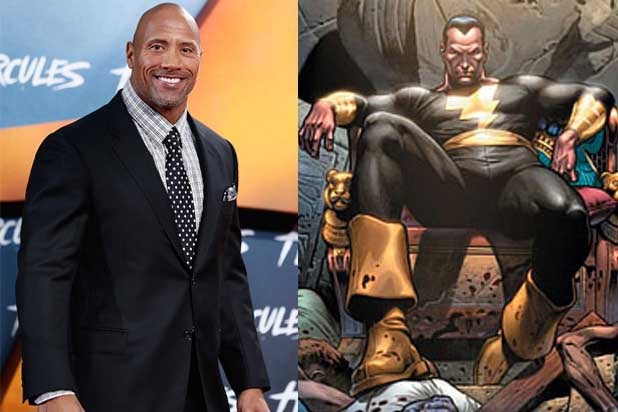 DC Comics fans have been eagerly waiting to find out whether Dwayne “The Rock” Johnson is playing superhero Shazam or supervillain Black Adam, and the action star has finally given them an answer: Black Adam.

“‘Kneel at his feet or get crushed by his boot.’ My honor to become.. #BlackAdam,” Johnson tweeted on Wednesday morning.

A studio spokeswoman confirmed Johnson’s character, and told TheWrap that screenwriter Darren Lemke (“Jack the Giant Slayer”) is attached to the project Johnson is also producing for New Line Cinema.

No director is attached yet, and there is also no set production date.

Black Adam, ranked by IGN as the 16th greatest comic book villain of all time, is chief antagonist for Shazam — a.k.a. Captain Marvel.

Like the titular superhero in the film, he was given his powers by a wizard named Shazam, but then became corrupted by them in ancient Egypt and overthrew a pharaoh. Unable to revoke his powers, Shazam banished Black Adam to the farthest star in the universe.

Black Adam’s origin has changed over the years, though. He became more of an anti-hero trying to clear his name in more recent comic book arcs, so it’s not clear how the character will be presented in the upcoming movie about a young boy who is granted super powers in times of need.

Johnson’s use of the hashtag “#TheAntiHero” in his tweet (below), however, certainly suggests his incarnation of the villain will be inspired by the more recent comics.

Johnson, who has a number of blockbuster franchises under his belt, was last seen on the big screen in Brett Ratner‘s “Hercules.” He recently wrapped New Line’s “San Andreas,” which will hit theaters on June 5 next year, and is one of the stars of Universal’s April release “Fast & Furious 7.”

“Kneel at his feet or get crushed by his boot.” My honor to become.. #BlackAdam #TheAntiHero #DCComics pic.twitter.com/Qk55eNf3R7