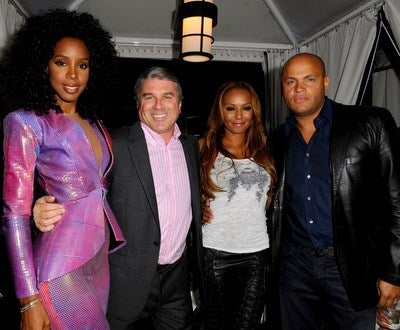 E!’s top two, Ryan Seacrest and Comcast president-CEO Ted Harbert, led the channel’s 20th birthday celebration with all of the Kardashians, Katharine McPhee, Ne-Yo and Nick Cannon under lights and cameras on the roof of the London Hotel in West Hollywood on Monday night.

Even Melissa Rivers, an original half of the channel’s signature red-carpet coverage, was back for a curtain call and the poolside performance by Kelly Rowland (pictured, left, with Harbert, Melanie Brown and Stephen Belafonte; photo by Michael Caulfield/Wireimage).

At the same time Jack Bauer was sauntering offscreen in the “24” series finale, former co-star Roger Cross promised TheWrap that he had the 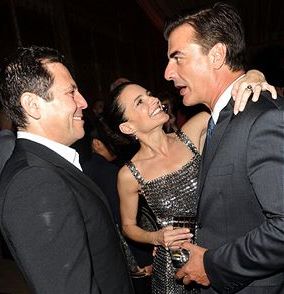 finale TiVo’d at home and would be watching it after the bash.

Although the channel is not yet “legal” at age 21, the soiree was heavy on Diddy’s Ciroc Vodka and light on personalities from the channel’s past. Early on-air personalities like Brooke Burke, Steve Kmetko and host-turned-author Jules Asner did not make the celebration. Talent from beyond the network, like Kat Von D (TLC), Tyrese Gibson and Sophia Bush (the CW) saw aerial performers over the pool, but not Bon Jovi’s Richie Sambora, who rushed out after the red carpet to get home to his kids. 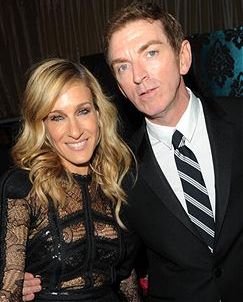 On Saturday, Rob Dyrdek threw open the doors to his Fantasy Factory, an indoor skatepark wonderland, and wrangled celebrity pals like the Beckhams to help him film the season finale of his self-titled MTV show.

To thank the pro skater for basing his show and his SK8 4 Life foundation in downtown Los Angeles, Mayor Antonio Villaraigosa served as Dyrdek’s “cuecard” holder during a live auction (photo courtesy of Jordan Strauss). 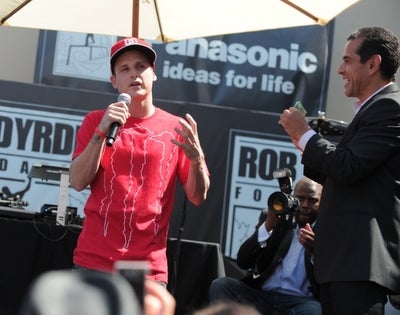 In between chomps on the fast food from Wahoo’s and Carl’s Jr. outside, UFC CEO Dana White bid on almost everything – over $50,000 himself – to donate skateboards to local LA youths.

Inside, Victoria Beckham did no bidding. She joined stylist-turned-VH1 star Ken Paves to work with various Beckham kids in creating their own DC shoes.

Later in the weekend, the stars of "Lost" fanned out to celebrate the finale. While Matthew Fox, Terry O’Quinn and other leads prepared to appear on "Jimmy Kimmel Live," Michael Emerson led a massive fan screening at downtown L.A.’s Orpheum Theater and Rebecca Mader brought fans Carson Kressley and Wilmer Valderrama to her party at the Carrera Summer Escape in Las Vegas.