During the U.S. promotional tour for our forthcoming movie "The Eclipse," I had the privilege of traveling around with the movie’s star, Ciaran Hinds. Before I go any further, I will clarify for all his adoring fans that he is just as warm, generous and lovable as you have dared hope, so he was a total pleasure to travel with. 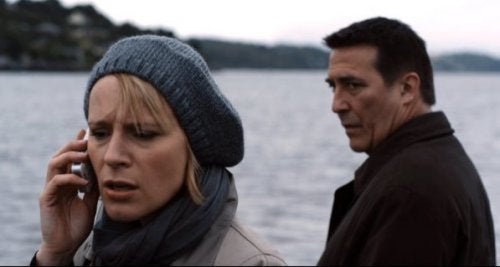 We must have done a hundred interviews in those few days in a bunch of American cities.

As Ciaran and I have worked together in both theater and cinema, a question that kept coming up was: "What are the differences between working for theater and film?"

It forced to me to think about it in ways that I perhaps hadn’t before.

Directing a play is like being a coach for a sports team. You are preparing the team to be fit for the nightly ordeal of performance. You are going over the same stuff every day, digging deeper and deeper until you are so sure of the game plan that you are ready to meet the audience and hopefully "win" the game.

On a movie, you are doing something completely different every day. You are looking to capture little moments and they only have to happen once.

Often we didn’t rehearse before shooting on "The Eclipse." We shot the rehearsal precisely to avoid looking "ready."

There is a wonderful tentative quality in an unrehearsed first take that you may never capture again, so I learned to always shoot the rehearsal, and many of those takes are the ones we used.

Theater and film also encourage different kinds of dreaming. In the theater, the audience members use what’s happening on stage to go inside their own heads.

By this I mean the audience has to do a lot of the work. We know these characters are really actors performing in front of us, yet we concentrate hard enough to suspend our disbelief and enter our own dream of what is unfolding before us. This effort intensifies the audience’s experience and an almost telepathic communication develops between the audience members and the actors. We work to share in the collective dream. And when it works, the rewards can be deep and memorable.

In contrast, on film the director presents the dream already complete. The camera shows you not just an "idea" of a location but the actual location. The music guides us to the precise emotional state the director intends. The camera can read a good actor’s mind — so their thoughts are beyond doubt. This is the pleasure of cinema and why it is also so intense.

Both theater and cinema present a dream. One feels shared and the other a little more private.

But both dreams are impossible without the actors’ belief in what they are doing. This belief is infectious and takes us not just into other realities but deeper into this reality.

For this reason working with great actors is a privilege in any medium. And I count myself very lucky to have had the opportunity to do so.

BIO Conor McPherson
Award-winning screenwriter and Tony-nominated playwright Conor McPherson is the director of "The Eclipse," which recently won the Melies d’Argent award for Best European Film at the Sitges Fantasy Film Festival. It opens March 26 in New York and Los Angeles, then goes wider in April. His latest play, an adaptation of Daphne Du Maurier’s "The Birds," opened at the Dublin Theater Festival in fall 2009.

Award-winning screenwriter and Tony-nominated playwright Conor McPherson is the director of "The Eclipse," which recently won the Melies d’Argent award for Best European Film at the Sitges Fantasy Film Festival. It opens March 26 in New York and Los Angeles, then goes wider in April. His latest play, an adaptation of Daphne Du Maurier’s "The Birds," opened at the Dublin Theater Festival in fall 2009.
x
Looks like you're enjoying reading