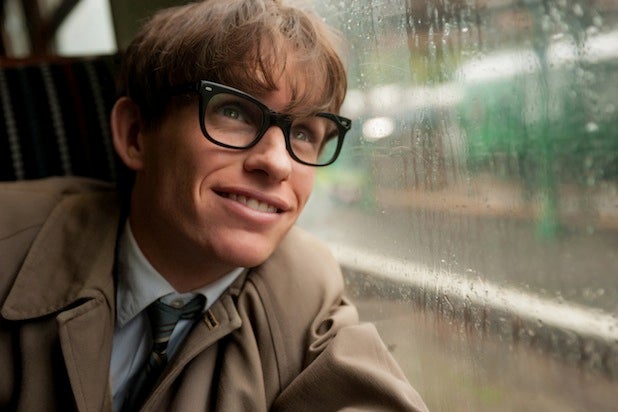 Eddie Redmayne, who stars in “The Theory of Everything,” has been named this year’s first recipient of an honorary award from the Palm Springs International Film Festival, PSIFF announced on Friday.

Redmayne will receive the Desert Palm Achievement Award, Actor for his performance as  physicist Stephen Hawking in director James Marsh’s film, which deals with Hawking’s relationship with his wife Jane (played by Felicity Jones), which began in college before Hawking was diagnosed with ALS.

See video: How Eddie Redmayne, Felicity Jones Took on Stephen Hawking’s Love Story in ‘The Theory of Everything’ (Video)

Past recipients of the award include Oscar winners Matthew McConaughey, Jeff Bridges and Daniel Day-Lewis, and nominees Bradley Cooper and Brad Pitt.

For the 32-year-old Redmayne, “The Theory of Everything” is by far the most celebrated role in a career that also includes “Les Miserables,” “My Week With Marilyn,” “Elizabeth: The Golden Age” and “The Good Shepherd.” He won a Tony Award for “Red.”

The early-January film festival, located in the desert resort town 100 miles east of Los Angeles, uses its annual black-tie Awards Gala to raise money for the Palm Springs Film Society. Like the Santa Barbara International Film Festival, which takes place in late January, it negotiates with studios to land a lineup of Oscar contenders for special awards.

Palm Springs’ Awards Gala will take place on Saturday, Jan. 3 at the Palm Springs convention Center. The festival itself will begin on Jan. 2 and run through Jan. 12.