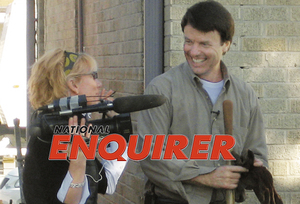 The National Enquirer has still more details of the John Edwards affair this week: Rielle was whisked away in a jet. The couple had met three times at the Beverly Hilton this year. "John Edwards is still lying," says an Enquirer source.

As the pieces of this sordid tale continue to fall together, it is worth taking another look at why the mainstream media has been unable to match the reporting precision of the National Enquirer. The reason boils down to this: tabloids pay. And they pay big.

Here’s what I’ve learned over the years about tabloid journalism: it is usually the principals involved who provide the crucial details, for money. That’s why the information is so often on the nose.

How does the News of the World manage to be there just when Michael Jackson or Elizabeth Taylor leaves their plastic surgery appointment? It’s not by chance. Usually the doctor tips them off. Sometimes they even have the celebrity’s agreement.

My guess is that there is a simple reason why the mainstream media is unable to confirm the Edwards-Hunter affair during these past weeks. Because very few people knew what had been going on. Edwards’ staff didn’t know. Elizabeth Edwards didn’t know. The group may have been as small as three: Edwards, Hunter and her pal Bob McGovern.

One of those, in my view (and not Edwards), sold the information.

To be clear: John Edwards acted like a fool. He shamed himself. He damaged his family. He showed appalling judgement. But watching him on ABC in his public display of self-pity and desperation, it seemed like something private came unraveled. It felt very much like a blackmail scheme gone awry – and everybody lost.

Imagine if Hunter was blackmailing Edwards for money — or, for more money, since she was already being paid a monthly stipend. And if she were pressuring him by leaking information to the National Enquirer. And if she tipped off the Enquirer to the July meeting, including such details as the number of rooms rented, and who was in them.

My guess is that Edwards declined to meet her demands these last months, including at this last meeting. He told ABC the meeting ended without “resolution.” I’d guess that Hunter sold the photo from an earlier meeting at the Beverly Hilton to the National Enquirer. That would explain that fuzzy picture of Edwards holding a baby, which was not taken in July, when Edwards wore a button-down shirt. The editor of the Enquirer editor said on CNN last week that we “can presume” he paid for that photo. Who took it? Someone in the hotel room with Edwards, obviously.

Whose baby is it? I don’t know. Maybe Edwards is lying about paternity. The Enquirer insists the baby is his, with no evidence other than "sources." So maybe he isn’t. Either way, someone was able to produce enough evidence – the fuzzy photo – to allow the Enquirer to make its case. Who stood to gain from that?

Last week I spoke to a reporter for the Raleigh News & Observer who said he spent five days in Los Angeles trying to confirm any aspect of the Beverly Hilton story. He came up with nothing. Zero. Zilch.

Not because he wasn’t trying. Because without a checkbook, the Raleigh News & Observer was not going to be let into the world of Rielle Hunter.