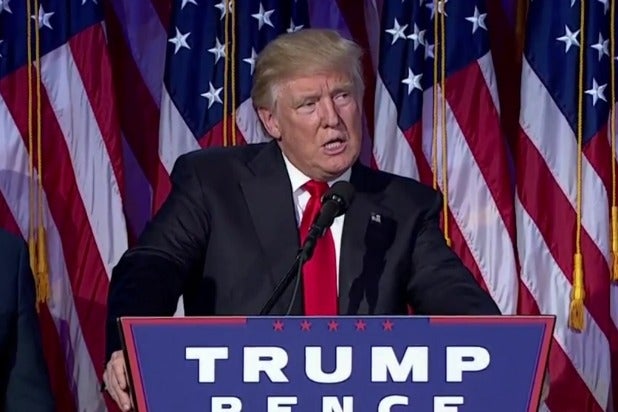 Donald Trump won the presidential election after a hideously divisive campaign in which he was accused of racism, sexism, and religious bigotry — but he pledged in his first words as president-elect to unite the nation and “be president of all Americans.”

Wisconsin pushed Trump over the top, giving him 274 electoral college votes — four more than he needed to dash Hillary Clinton’s hopes of becoming our first woman president. The Associated Press projected him as the winner shortly after 2:30 a.m. ET Wednesday.

“Sorry to keep you waiting, complicated business,” Trump told supporters. “I’ve just received a call from Secretary Clinton. She congratulated us — it’s about us — on our victory — and I congratulated her and her family on a very hard-fought campaign. … We owe her a major debt of gratitude for her service to our country.”

He said America needs to “bind the wounds” and come together.

“I pledge to every citizen of our land that I will be president of all Americans,” he said.

He later added: “This political stuff is nasty and it’s tough.”

Clinton did not address her supporters, and campaign manager John Podesta said she would not speak at all until morning. “They’re still counting votes and every vote should count,” he said, advising his audience to “get some sleep.”

Also Read: Captain America: 'This Is an Embarrassing Night for America'

The “Apprentice” star won the swing states of Pennsylvania, Ohio, Florida, and North Carolina — cutting off Clinton’s chances. Republicans, meanwhile, won enough seats to maintain their control of the House and Senate– making this the first time since 1928 that Republicans have won both Congress and the presidency.

As his supporters rejoiced, others greeted the prospect of a Trump presidency with apprehension. Stock market futures plummeted. Hollywood freaked. People who predicted a Clinton rout hung their heads. Americans suddenly felt what it was like to go through Brexit.

Here’s our complete breakdown of how he won, in one simple map.

The long, painful election of 2016 leaves in its wake talk of Tic-Tacs, e-mails, tax returns, and conspiracies. The presidential race provided a  choice between the first woman president, and a man who was caught on video boasting about grabbing and kissing women without consent.

It also pitted the ultimate political insider — a former senator and secretary of state who lived in the White House when she was first lady — against a consummate outsider who has never held public office.