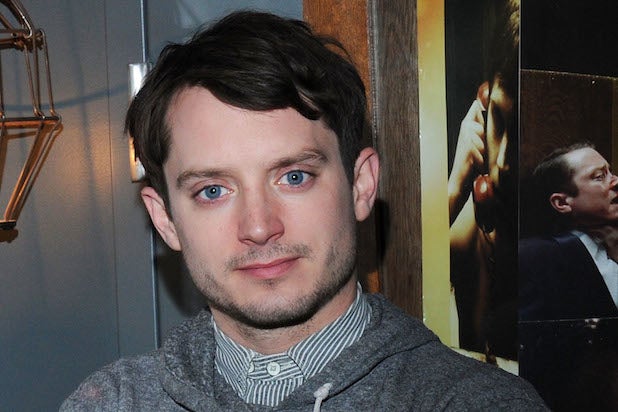 Considering his intercontinental travel itinerary and late night work schedule over the past month, it’s actually a wonder that Elijah Wood only had a cold the other day. He was in New York City to promote his new thriller, “Grand Piano,” alert between sneezes, despite what you have to figure was a pretty intense jet lag from trips to Utah (to premiere three films at Sundance) and then all over Europe for his first tour as a DJ.

Yes, Elijah Wood, a mainstay of American cinema since the late ’80’s and an icon to geeks around the world, is also a professional DJ.

The mini-tour, as he called it, sent him from Wales to Berlin, Istanbul, Copenhagen and then London, where he entertained club crowds with an eclectic mix of music, including “a bunch of 70’s New York disco records, African 12” reissues and some like, boogie stuff and then some actual 45s.”

“The Lord of the Rings” star, who a few years ago called the state of film dismal, is feeling more optimistic about it these days, thanks in part to new distribution options for indies like “Grand Piano” and “Cooties,” the latter which he produced with his horror label, SpectreVision. While studios concentrate on comic book movies, sequels and franchises, the remainder of movies are “basically $5 million and below,” which Woods finds frustrating.

“But I also think it’s kind of an exciting time for independent cinema,” he told TheWrap. “People are able to stretch dollars to make extraordinary things for less than a million. I feel like the distribution model is so open, there’s no one particular model now, so people are trying all kinds of different ways to get movies released.”

“Grand Piano,” for instance, was first released on video on demand, and will move into a limited number of theaters March 7.

The actor, who met director Eugenio Mira at Austin’s Fantastic Fest, made the movie in Spain. In it, he plays a world-class concert pianist who is spooked out of performing by making a major mistake while playing an exceedingly difficult piece, and haunted by then error for years.

When his actress wife ropes him into making a highly publicized comeback attempt, he runs into the waiting scope of a sniper (John Cusack) who tells him that he’ll blow his head off if he plays even one wrong note. The assassin’s motivated by more than sheer love of perfect performance, of course, but his goal is left a mystery for much of the film.

It was a technically challenging shoot, because much of the movie focuses on Wood playing piano, alone in front of a distant audience, reacting to the voice of the menacing Cusack piped into his ear.

“‘Grand Piano’ was all set, or a bulk of it, was set to music,” Wood explained. “It’s all set to a very strict time code, all the shots were pre-determined, there was a clip track that we were listening to, I’ve got an earpiece listening to John Cusack‘s voice, I’ve got certain bars of music that I’m going to play at a certain time, it was super technical, really enjoyable, too.”

(The man knows his music; he ran a record label, Simian Records, for a few years, though he said, “it’s sort of in flux at the moment,” adding, “I’m not really sure what I’m going to do with it, I haven’t done anything with it in a few years.”)

Wood talks about Mira in adoring terms, praise that was clearly authentic, judging by the way he leaped into his friend’s arms when he wandered into the room.

Wood will also be seen soon as the star of “Open Windows,” which was directed by his and Mira’s friend Nacho Vigalondo. All of the film’s action takes place on a computer screen, which was another technical challenge requiring him to talk to a camera.

The two films represent entries into a new chapter in his career, which also includes movies he had at Sundance: “Cooties” and “A Girl Walks Home Alone in the Night,” both produced his SpectreVision label.

Wood runs the company with two friends, Daniel Noah and Josh C. Waller, with the aim of providing an alternative to the low-budget mainstream horror — think the “Saw” franchise and the many found footage films — currently being made in America.

“Girl Walks Home” is a black and white, Iranian, Farsi-language vampire western — it has that category all to itself — and will obviously attract a largely niche audience. Its small scale makes it a good indicator of the sort of independent hustle that Wood is embracing with SpectreVision.

But without wide domestic theater distribution, film to make compromises.

“The thing that sucks now is that movies are financed on pre-sales,” he lamented. “This is a bummer because what that basically means is that it has to be a package that has foreign value, and that largely rests on the cast. And that puts you in a box, you know.

“When you’re trying to put together a film and let’s say you’re a director and you want your ideal cast and your foreign sales agent says they don’t have value, it becomes a frustrating process,” he said. “It becomes a name game to get the kind of money you need to get your film off the ground, and that’s a frustrating thing.”