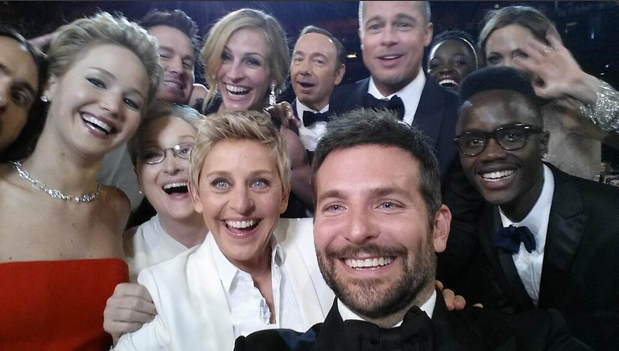 Ellen DeGeneres figured out the perfect formula to game the social media stats and break up the Twitter snarkfest: Star power and a direct plea to the audience.

In the middle of the show, DeGeneres wandered down the aisle and asked Meryl Streep to join her for what she hoped would be the most retweeted photo of all time. And, in a completely spontaneous outpouring of camaraderie, several of Streep’s friends and nearby stars decided to jump in the photo, as well, including Jennifer Lawrence, Bradley Cooper, Channing Tatum, Lupita Nyong’o, and Julia Roberts.

Minutes after DeGeneres posted the photo, it had over 115,000 retweets and crashed her Twitter page. Not bad. And it wasn’t even her first selfie of the night; you can see that here.

Samsung got its money’s worth. Although, as you can see below the first photo, not everyone will be pleased with the outcome.

Update: DeGeneres’ tweet broke the all-time record, previously held by Barack Obama for a tweet he sent after his re-election, in just 33 minutes.

If only Bradley’s arm was longer. Best photo ever. #oscars pic.twitter.com/C9U5NOtGap