Elon Musk’s “Initial Flamethrower Offering” is off to a red-hot start.

The same entrepreneur who wants to save the earth from fossil fuels also looks like he wants to burn it down in style, offering up a $500 flamethrower from The Boring Company — his underground tunnel company looking to alleviate traffic. And so far, they’re selling like hot cakes.

After going on sale this weekend, Musk has been tweeting sales updates, with “7k” sold at last check.

That comes out to $3.5 million in flamethrowers sold so far — and counting. The “world’s safest flamethrower” is “guaranteed to liven up any party,” as its preorder page puts it. Musk said he’s capping sales at 20,000, which would bring in a grand total of $10 million. That should help fund an extra tunnel or two. 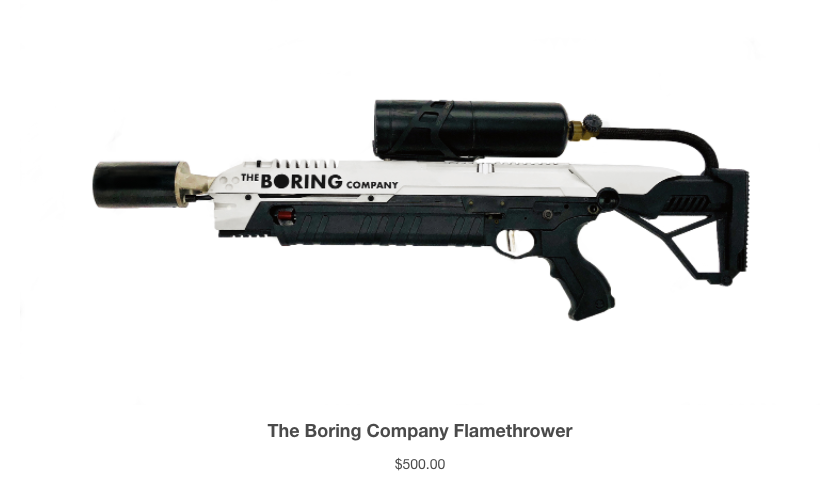 Musk’s flamethrower maneuver followed his “initial hat offering” — a spoof on the “initial coin offering” trend with cryptocurrencies — which sold more than 30,000 hats at $20 a pop.

Is it legal to just buy a flamethrower, though? Apparently, yes, in 48 states. Apologies to aspiring California customers, where you’ll need a permit, and Maryland, where it’s banned outright. Before shipping this spring, “aspiring flamethrower aficionados will be sent a terms and conditions rhyme for review and acceptance,” according to The Boring Company.

If you want to see it in action before making a decision, a giddy Musk posted a sneak peek on his Instagram.

Don’t do this. Also, I want to be clear that a flamethrower is a super terrible idea. Definitely don’t buy one. Unless you like fun.

And to be on the safe side, TBC is selling a $30 “overpriced” fire extinguisher as well.