Elon Musk’s now-notorious tweet on taking Tesla private has landed the electric car company in the crosshairs of the U.S. Justice Department — sending Tesla’s stock price downward in the process on Tuesday.

The DOJ has opened an investigation into Musk’s tweet last month he had “funding secured” to take Tesla private at a healthy premium of $420 a share, a Tesla spokesperson told TheWrap. The message — an unusual one from a high-profile executive, albeit not necessarily from Musk — halted trading of Tesla shares on the Nasdaq exchange on Aug. 7. When trading resumed, Tesla had spiked 11 percent to $380 per share.

Musk later walked back his comments, announcing on Aug. 24 Tesla would remain a publicly-trade company.

“Last month, following Elon’s announcement that he was considering taking the company private, Tesla received a voluntary request for documents from the DOJ and has been cooperative in responding to it,” a Tesla spokesperson told TheWrap. “We have not received a subpoena, a request for testimony, or any other formal process. We respect the DOJ’s desire to get information about this and believe that the matter should be quickly resolved as they review the information they have received.”

Despite the initial boost, Tesla’s stock has been battered in the last month, dropping to $260 a share at one point after Musk took a puff of marijuana on Joe Rogan’s podcast. A recent climb to $302 a share took a hit on Tuesday after Bloomberg’s report, with Tesla falling about 5 percent to $284 a share. 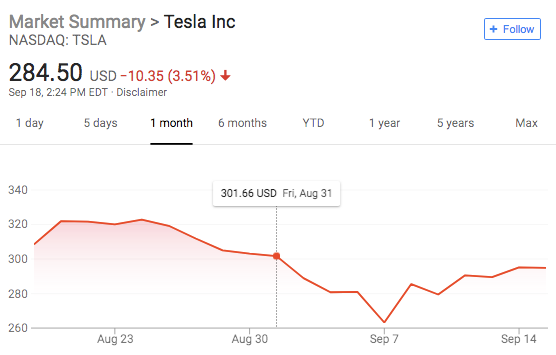 It’s been a rough month for Tesla shareholders (via Google)

Even before the DOJ’s investigation, Tesla was under the regulatory microscope, with the Security and Exchange Commission  “ramping up” its own look at Musk’s tweet last month.

Bloomberg was first to report about the DOJ investigation on Tuesday.