Elton John is the latest star to denounce DaBaby’s recent inflammatory comments about HIV, saying it’s the exact opposite of what a musician ought to do with their platform.

In case you missed it: DaBaby, who recently had major features on Dua Lipa and Camila Cabello hits, went on a strange rant to the crowd at Rolling Loud Festival in Miami on Sunday. The 29-year-old rapper said on stage, “If you didn’t show up today with HIV, AIDS, any of them deadly sexually transmitted diseases that’ll make you die in two, three weeks, put your cell phone light up.”

John weighed in on Wednesday, tweeting, “We’ve been shocked to read about the HIV misinformation and homophobic statements made at a recent DaBaby show. This fuels stigma and discrimination and is the opposite of what our world needs to fight the AIDS epidemic.” 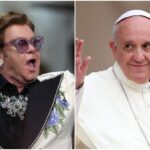 Using that as the jumping off point of a five-tweet thread, John went on to share the latest data on those affected by HIV, noting those who are diagnosed can live a full life thanks to modern-day medicine. The legendary artist added that “homophobic and HIV mistruths have no place in our society and industry” and “a musician’s job is to bring people together.”

John is just the latest artist to condemn DaBaby’s words, after Dua Lipa released a statement on Tuesday.

“I’m surprised and horrified at DaBaby’s comments. I really don’t recognize this as the person I worked with,” Lipa, who collaborated with the rapper on her hit song “Levitating,” wrote. “I know my fans know where my heart lies and that I 100% stand with the the LGBTQ community. We need to come together to fight the stigma and ignorance around HIV/AIDS.”

DaBaby did post an apology on his Twitter late Tuesday night following the backlash (and before John’s comments).

“Anybody who done ever been effected by AIDS/HIV y’all got the right to be upset, what I said was insensitive even though I have no intentions on offending anybody. So my apologies,” he wrote.

You can read Elton John’s full comments below.