The future of EMI, a decades-old music titan in the throes of survival mode, will be forged in the weeks to come. And to quote the firm’s most bankable property: It’s getting better all the time.

If the London-based conglomerate can get over the hump of an overdue debt payment and convince investors to buy into its five-year restructuring plan, all the doomsday predictions about the world’s fourth-largest music company — fueled by a recent exodus of major talent, including Paul McCartney — will seem like so much hand-wringing.

The difference: EMI artists are killing right now, from Lady Antebellum to Slash, and the company’s market share has increased while the competition has slipped.

On top of that, insiders say, the turnaround plans of Terra Firma — the British equity giant that bought the company three years ago — are finally paying dividends.

“For the last 18 months, the suits are all gone — and EMI is now being run by music people,” a financial analyst who’s been closely watching events at the label told TheWrap. “And they are doing a good job.”

Still in question: Is it good enough — and in time — to save the company that houses the catalog of the Beatles, Coldplay, Katy Perry and Kylie Minogue?

Terra Firma seems to think so.

EMI is facing major challenges on many fronts: a debt payment to Citigroup in arrears; two years of corporate financing chaos; and a catastrophic decline in music industry sales overall.

Despite all that, Terra Firma has asked for $200 million from its investors, less than half the amount that initially was expected, to service its debt payment to Citigroup.

And the stakes are high. If Citigroup doesn’t get the money, which covers loan payments missed in March, by June 11, it will effectively control the company. In 2007, Terra Firma paid $6.51 billion for the debt-heavy 79-year-old label, with a loan of $4 billion-plus from Citigroup and the rest in equity.

(Citigroup did not respond to TheWrap’s requests for comment. However, the consensus in the investment community is that it has no desire to be running a record label. If Terra Firma cannot raise the money, Citigroup likely would move to sell all of EMI — or slice it up and auction off the properties.)

Given the rosy picture EMI can present to its investors, however, all of this seems unlikely. 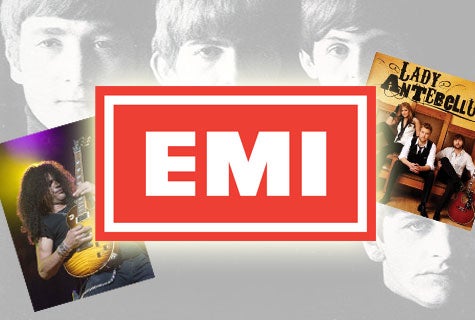 While other labels like Universal and Warner have dropped overall, EMI’s U.S. market share, according to Nielsen Soundscan and based on first-quarter numbers, is up. Contacted by TheWrap, an EMI representative would say only: “This first quarter is up significantly."

Since its release in September, "The Beatles Remasters" has sold more than 13 million units. But this growth isn’t just Beatle bounce. With albums like former Guns N’ Roses guitarist Slash’s latest solo effort to Gorillaz’s “Plastic Beach” to country trio Lady Antebellum, EMI has been riding high in the charts in recent weeks.

The latter release, in particular, is dominating the entire industry.

With that in mind — not to mention a digitally hopeful five-year restructuring plan submitted last month by EMI execs — Terra Firma is looking to begin a long-term fix for EMI.

The firm, which manages more than $20 billion in investments globally, is vehemently shaking the trees of its long-term investors, many of whom have ended up empty-handed from their initial investment, to raise the $200 million debt payment to Citi — fast, before a May 14 compliance certificate deadline.

Once that funding is in place, Terra Firma will look to raise another approximately $400 million later this year for the label.

“The project is intended to strengthen the company by securing additional investment for future growth and creating stability for our current and future artists,” Terra Firma spokesman Andrew Dowler told TheWrap from London. “EMI intends to complete the project by mid-June."

There’s no doubt that EMI has taken some artistic hits in recent years, losing Radiohead, the Rolling Stones and, most recently, Paul McCartney, who took his post-Beatles catalog over to Concord Music (that label recently released his “Good Evening New York City” live album and DVD).

But those are body blows that, some say, are much more about perception than reality.

“Radiohead had already drifted away and Jagger was gone seeking the best price, like he always does,” says an investment source close to EMI and Terra Firma. “Paul McCartney with his Beatles hat on is great, but as a solo artist, he isn’t any great loss.”

Still, in the music industry, like the movie business, perception can often become reality

Despite its stable of chart-toppers, growing revenues and market share, EMI has been hurt by artistic losses and the unsettled state of its corporate finances.

“There is no doubt that without the question marks over the business, more artists would have signed with us,” an EMI insider told TheWrap, “and more confidence would have been felt by artists who are with us already.”

Still, EMI’s music earnings, based on EBITDA, have tripled under Terra Firma, which instigated corporate cost-cutting measures and aggressive merchandising, to almost $250 million.

Terra Firma purchased EMI in May 2007 based in part on price and value recommendations from Citigroup, which was advising and lending to EMI as well as extending financing for the deal to Terra Firma.

Of course, the eye-to-eye view is clearer in hindsight.

Those recommendations, claims Terra Firma in its ongoing lawsuit against Citigroup, not only falsely inflated the worth of the label by billions, but, in terms of there being another bidder for the record company that compressed the deal deadline, were out-and-out untrue.

Citigroup did not reveal, the suit contends, that Cerberus Capital Management had withdrawn its bid for EMI. Terra Firma also alleges that Citigroup, which has said the case “is entirely without merit,” is, according to the complaint filed in December, undermining its management of the label in pessimistic industry analysis and refusing to renegotiate loan agreements.

Regardless of the breakdown — or if Terra Firma itself starts selling off bits of the label — EMI likely won’t come cheap.

"As broken as the EMI deal is financially, there is still value in the company, which means no one is going to steal EMI or any of its assets," Drew Lipsher, of NYC-based private equity firm Greycroft Partners, told TheWrap. "If Citibank ends up in control of the company, there is no way that it will not undertake a proper auction for the assets in order to extract the highest fair market value by creating a competitive bidding situation."

Still, EMI and Terra Firma think they might have cut the Gordian knot and, with fresh funds in place and the Citigroup loans placated, they can build on their chart success, both internally and externally.
“This allows EMI to tell artists, ‘We’re bulletproof,’” says a U.K. source at the label, "and we can once again concentrate on being a music company.”