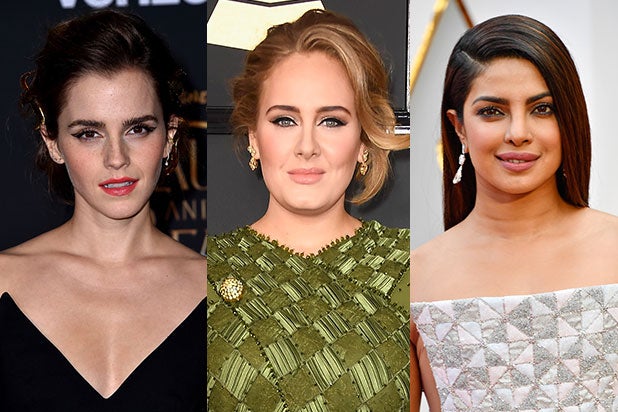 Hollywood is taking to social media to wish everyone a Happy International Women’s Day.

“Whatever women do they must do twice as well as men to be thought half as good. Luckily, this is not difficult,” Adele tweeted.

Watson shared how the literary world plans to mark the occasion: “From midnight NYC time, book fairies around the WORLD will start hiding feminist books.”

March 8 is seeing the convergence of several campaigns to show solidarity, including “A Day Without a Woman” and Women’s Strike. According to USA Today, the organizers behind the Women’s March on Washington are planning walk outs, rallies and marches to highlight lower wages, sexual harassment and job insecurities.

For example, United Talent Agency will observe Wednesday’s followup protest to the Women’s March on Washington. Female employees at the Hollywood agency will gather at offsite meetings in New York, Los Angeles and Toronto, where their star clients and thought leaders will speak.

The Women’s Strike is planned by women in 50 different countries to shine light on labor rights, gender violence and reproductive freedom, among others.

"Whatever women do they must do twice as well as men to be thought half as good. Luckily, this is not difficult" #internationalwomensday pic.twitter.com/3jzQcEpKnH

Happy #InternationalWomensDay
This is Teresa Żabińska. Last night we celebrated her mother, Antonina. Today we celebrate all women! ❤ pic.twitter.com/daljLyjaoa

On International Women's Day, join me in honoring the critical role of women here in America & around the world.

Happy international women's day. @realDonaldTrump, a special congrats to all the int'l pussies that have been assaulted by you.

If you can't be bold for yourself, be bold for others: run for office, volunteer, get active. #BeBoldForChange pic.twitter.com/Dng85KGEEW

or, as it's often called on here, #WhyIsn'tThereAnInternationalMensDay

Today is International Women’s Day and #ADayWithoutAWoman, a day to recognize how far women have to go to achieve full equality.

I also want to honor everyone striking today and all of you who can't. #ADayWithoutAWoman is for all of us, and we will never stop fighting

Happy International Women's Day! I have been beyond blessed to have the most incredible support system and this picture sums it up. To the love of my life, @gisele, my mom, my sisters, my nieces and my little Girlie Girl — thank you for bringing so much love and joy to my life. And thank you for being such great examples of compassion and empathy. The world needs much more of it! I love you all!!