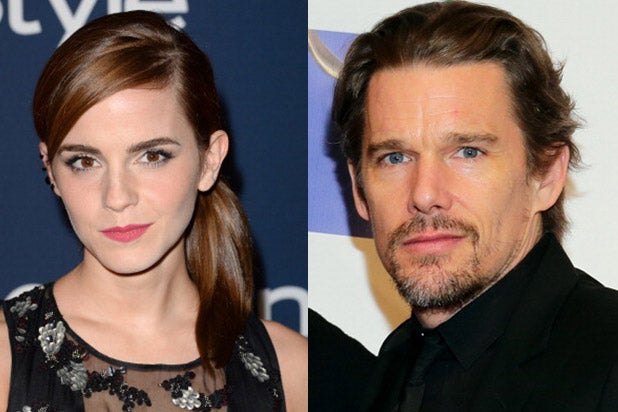 “Harry Potter” actress Emma Watson has signed on to star opposite Ethan Hawke in Alejandro Amenábar’s upcoming thriller “”Regression,” which will be released by TWC-Dimension in 2015, TheWrap has learned.

Amenábar (“The Others”) will direct from his own original screenplay, while his longtime partner Fernando Bovaira will produce for his MOD Entertainment banner along with Canadian producer Christina Piovesan.

FilmNation Entertainment is handling international sales for the film, which is keeping plot details under wraps.

“I am passionate about Alejandro and his work and am so happy to be collaborating with him. I’m really excited by the challenge my character presents to me as an actress. I can’t wait to begin,” said Watson.

“Emma is a beautiful, humane, sensitive and very talented woman, and I feel very fortunate to be working with her. I’m sure that her long-standing stellar career has barely begun,” said Amenábar.

“Regression” finds Amenábar returning to the thriller genre, where he and Dimension previously had great success with the Nicole Kidman movie “The Others,” which grossed over $200 million worldwide.

Also Read: Toronto: Emma Watson to Play Bipolar Englishwoman in ‘Your Voice in My Head’

The film marks the fourth planned release under TWC-Dimension, which has Bob Weinstein and Harvey Weinstein teaming up to acquire, develop, produce and distribute films for which they both share a common passion. The Weinsteins have been primarily responsible for their own labels in recent years, but TWC-Dimension will allow the two to join forces and combine some of the core prestigious sensibilities of a TWC release with the mainstream sensibilities of a Dimension title. The new company’s other movies include “Paddington,” “Passengers” and “Murder Mystery.”

Watson, who is best known for playing Hermione in the “Harry Potter” franchise, last starred in Sofia Coppola’s “The Bling Ring” and played herself in Seth Rogen and Evan Goldberg’s apocalyptic comedy “This Is the End.” Watson next stars alongside Russell Crowe and Jennifer Connelly in Darren Aronofsky’s biblical epic “Noah.”

Watson is repped by WME and Markham Froggatt Irwin.