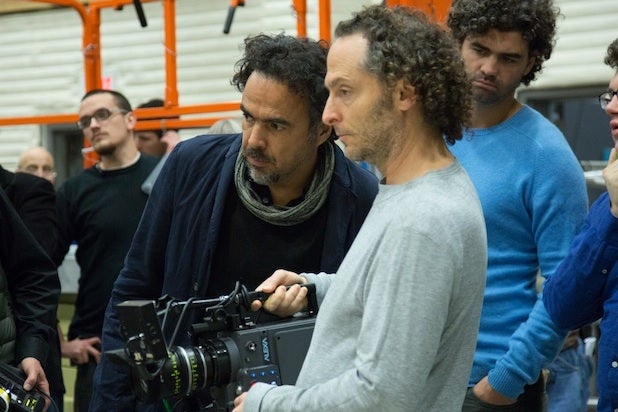 Emmanuel Lubezki has been named the outstanding feature film cinematographer of 2014 for his work on “Birdman” at the American Society of Cinematographers’ ASC Awards on Sunday night, the fourth time Lubezki has received the highest film honor bestowed by the professional organization.

Together with his previous wins for “Gravity,” “The Tree of Life” and “Children of Men,” Lubezki has now tied Conrad L. Hall for the most ASC wins.

His work on “Birdman,” which he and director Alejandro G. Inarritu carefully choreographed to make the film appear as one continuous shot, has made him a strong favorite to win his second consecutive cinematography Oscar, following last year’s victory for “Gravity.”

The ASC victory continues a dominant showing by the film in this season’s guild awards.

See video: Wrap Screening Series With ‘Birdman’s’ Michael Keaton: ‘We Knew We Were Onto Something Risky’ (Video)

To win the award, Lubezki beat Robert Yeoman for “The Grand Budapest Hotel,” Oscar Faura for “The Imitation Game,” Dick Pope for “Mr. Turner” and Roger Deakins for “Unbroken.” If Deakins had won, it would have been his fourth ASC Award, too.

The ASC nominations matched the Academy’s in four out of five movies, with the Academy’s Cinematographers Branch opting for “Ida” instead of “The Imitation Game.”

“Ida” won an ASC Award last year in the newly-created Spotlight category, which was designed to salute films that received most of their exposure at film festivals or in limited release. This year’s Spotlight Award went to Peter Flickenberg for another stylish black-and-white European film, “Concrete Night,” which was Finland’s entry in this year’s Oscar foreign-language race.

In the 28 years the ASC has been giving out awards, the winner has gone on to win the Oscar for cinematography only 11 times, including five of the last 10 years. Only twice in that time has the Oscar winner not been an ASC nominee.

In one of the two television categories, Jonathan Freeman was honored for shooting the “Golden Days for Boys and Girls” episode of “Boardwalk Empire,” which beat episodes of “Game of Thrones,” “Gotham,” “Manhattan” and “Vikings” as the best episode of a regular series. John Lindley won the other TV award, which went to a movie, miniseries or pilot, for shooting the pilot of “Manhattan.”

The ceremony took place at the Hyatt Regency Century Plaza Hotel in Century City. In addition to the competitive awards, the ASC gave honorary awards to cinematographers John Bailey, Bill Roe, Matthew Leonetti and Phil Meheux. The organization’s Governors Award went to Barbra Streisand, who paid tribute to a number of cinematographers she’s worked with in what was by far the evening’s longest speech.