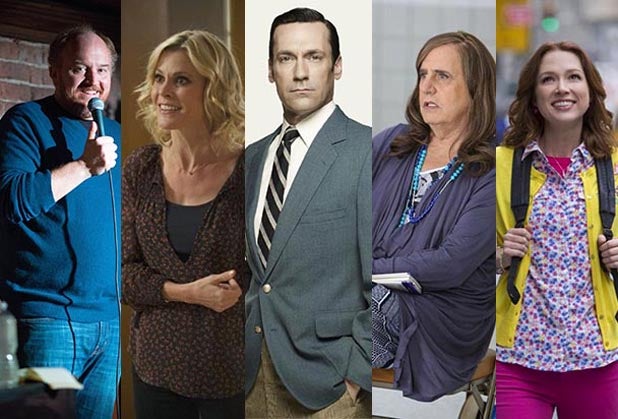 Jeffrey Tambor‘s Maura Pfefferman is a new kind of television heroine for a new era of television. Playing a grandfather who comes out to his family as transgender in “Transparent,” Tambor is embracing a part that is close to his heart, and extremely personal for show creator Jill Soloway. But beyond that, Maura is also a potent symbol for a television landscape that is itself in the middle of a dramatic transition. As Soloway put it, “I feel like I’m part of this creative revolution.” (Read more about Tambor’s revelatory performance in our cover story.)

And for the 68th Primetime Emmy Awards, the challenge will be to reflect that revolution. In 2013, Netflix won the first-ever Emmy for a streaming service; the following year’s “Transparent” put Amazon Studios on the awards map by taking home surprise Golden Globe statuettes for the show and for Tambor. It barely matters where television comes from anymore, or the size of the screen on which it’s viewed. Broadcast, public television, basic cable, premium cable, subscription, streaming, web-based, who cares? The Emmys cast a wide net, and the competition is bursting with shows from avenues that would have been unimaginable only eight years ago.

Why did we pick that figure, eight years? Because that’s how long it’s been since “Mad Men” premiered and won the first program Emmy that ever went to a basic-cable series, against a field heavily weighted toward broadcast cable.

And now Matthew Weiner‘s show is in its final season, competing one last time in an era in which no broadcast network has even been nominated in the top drama category in four years. This is a television landscape we couldn’t have imagined any more than Don Draper could have imagined the internet and President Hillary Clinton. (President Bill Clinton, on the other hand, he no doubt could have envisioned.)

Emmy voters are famously creatures of habit, which means that old timers like Don Draper may still have the edge over newcomers like Maura Pfefferman. Or do they? Are the Netflix wins last year a sign that things are cracking? Or was the fourth straight comedy-series victory for “Modern Family” just as reliable an indicator that those cracks don’t run too deep?

In the comedy-series categories, common sense says that “Modern Family’s” winning streak (five years and counting–which is to say, every year it’s been on the air) has to eventually come to an end. But last year’s seemingly strongest challenger, “Orange Is the New Black,” has been pushed to the drama categories by new Emmy rules, perhaps opening the door for HBO’s “Veep” or “Silicon Valley,” for FX’s “Louie,” for NBC’s “Parks and Recreation” or CBS’s “The Big Bang Theory” — or, just as likely, for “Transparent” or Netflix’s “The Unbreakable Kimmy Schmidt” to snag the biggest win ever for a streaming show.

On the drama side, meanwhile, the juggernaut that was “Breaking Bad” is gone, which could allow the final season of “Mad Men” to claim the prize that has eluded it since 2011, when it scored the last of its four consecutive wins. But voters seem to have cooled on the show — so unless Weiner sticks the landing the way Vince Gilligan did with “Breaking Bad,” there could be a real opportunity here for Netflix and “House of Cards,” for HBO and “Game of Thrones,” for PBS and “Downton Abbey” … or, just maybe, for the broadcast networks to reclaim the territory they once owned by scoring a victory for Fox’s “Empire” or CBS’s “The Good Wife.”

That’s the delicious beauty of this Emmy season: For once, almost anything seems possible. In this state of transition, great TV can come from anywhere. Maybe Emmy voters will care where it comes from, maybe not.

TheWrap’s staff would also like Emmy voters to consider some worthy shows and performances beyond the usual suspects: Read our choices here.

Look around, voters, and embrace the change.