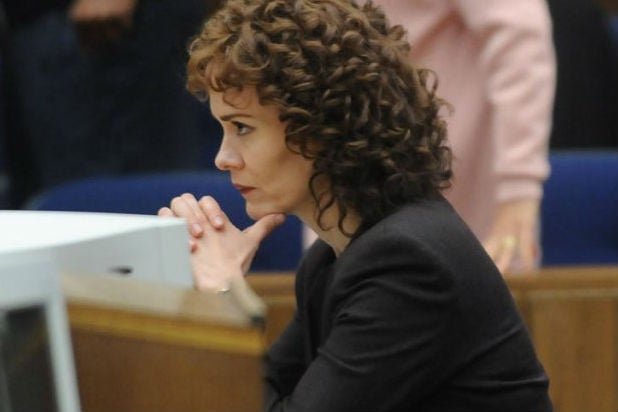 When FX announced that the first season of Ryan Murphy‘s “American Crime Story” would focus on the O.J. Simpson trial, many were left wondering how a scripted series could possibly bring new life to one of the most high-profile, highly-scrutinized cases in American history.

But 10 episodes — and now 22 Emmy nominations — later, those concerns seem laughably misguided. “The People v. O.J. Simpson” turned out to be one of the most popular and compelling retellings of the saga in recent memory.

For many, Sarah Paulson‘s humanizing portrayal of Marcia Clark in particular stood out among an impressive cast for the way she shone new light on one of the case’s biggest players — one who didn’t get the best treatment the first time around. And Emmy voters seemed to agree, as Paulson was nominated for Outstanding Lead Actress in a Limited Series or Movie for the role this morning.

But Paulson says it didn’t take much work on her part to sympathize with Clark. That credit goes to the show’s writers and to Clark herself, who suffered the dehumanizing scrutiny of public attention and took unbelievable amounts of abuse, all for just doing her job.

“For me, finding the empathy, I didn’t have to search for it,” Paulson told TheWrap the morning of the nominations. “Just think of the circumstances: This is a real person, of flesh and blood, with a beating heart. A mother of two small children, going through a divorce, trying to put a man she believed to be guilty of a double homicide behind bars.”

“And she did not rest until she saw that outcome. She was incredibly dedicated to the cause,” she continued. “There was no way I couldn’t have great respect and empathy for what that cost her.”

And it cost her quite a bit. During the 1994 trial, the media and the public at large weren’t shy about mocking Clark for her looks, for her personality, for just being a woman. But through it all Clark remained “fearless” and dedicated, and Paulson said it was impossible not to sympathize with someone that strong.

“You kind of can’t believe it every page you turn,” she said. “You cannot believe that this was their lives, that this was how it all shook out. Every moment was a ‘holy s—‘ moment.”