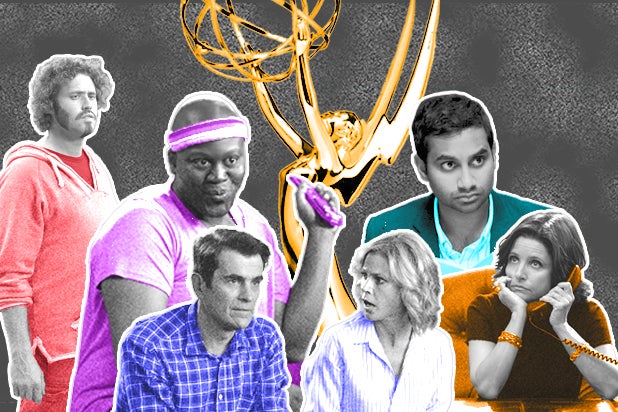 Past nominees “30 Rock,” “Parks and Recreation” went off the air in recent years. “Louie” is on hiatus and didn’t air during the 2015-2016 TV season. “The Big Bang Theory” dropped out of the top category last year after four straight nominations. A slew of acclaimed new comedies lurk, ready to crash the party.

In theory, the Emmys’ comedy categories should be ready for change. But as we know, change comes slowly to voters in the Television Academy, so one must tread carefully when making Emmy predictions in comedy.

Still, we expect to find a few new faces in the mix this year, as voters slowly come to terms with the changing face of television comedy. And while the comedy categories are in many ways the last, best hope for the broadcast networks to maintain a foothold at the Emmys, that foothold is getting more and more precarious.

Note: The Outstanding Comedy Series category typically has seven nominees, and the acting categories six each. But in the case of particularly close votes, the Television Academy also has rules that can expand each category by one or two nominees. We’re assuming that each of these categories will have the usual number of nominees, but it’s likely that a couple of them may end up bigger than that.

Also Read: Emmy Predictions, Drama: In With 'Mr. Robot,' Out With 'Downton Abbey'

This is the second in a series of predictions for the 68th Primetime Emmy Awards nominations.

Among the shows with a chance to become first-time nominees in this category are “Master of None,” “Black-ish,” “The Last Man on Earth,” “Broad City,” “Casual,” “Crazy Ex-Girlfriend” and “Mozart in the Jungle.” But how many open spots are there, really?

Reigning champion “Veep” doesn’t figure to be going anywhere, and neither do “Transparent” and “Unbreakable Kimmy Schmidt,” the two shows that got nominations for their first seasons last year. After a record-tying five straight wins from 2010 to 2014, “Modern Family” is no longer the Emmy juggernaut it once was, but it should still have the clout to hang onto a nomination here. HBO’s “Silicon Valley” might be on the bubble, particularly if voters remember that they used to really like “Big Bang,” but we think it’s safe, too.

That leaves two slots, with “Master of None” and “Black-ish” the likeliest occupants, “Last Man on Earth” and “Mozart in the Jungle” potential spoilers and “Broad City” and “Crazy Ex-Girlfriend” delicious longshots.

Two of last year’s nominees, Louis C.K. (“Louie”) and Matt LeBlanc (“Episodes”) aren’t eligible this year, which will open up a spot for Ansari, and might even get four-time winner Jim Parsons (“Big Bang Theory”) back in the game. But the other five of last year’s seven nominees seem to be entrenched Emmy favorites, so we’re guessing that Ansari is joined by defending Emmy champ Tambor along with Anderson, Macy, Forte and Cheadle.

Also Read: Emmy Contender Will Forte on That Crazy Haircut in 'Last Man on Earth': 'It's Really Fun to Be Weird' (Video)

Otherwise, though, this could be a spot for newcomers. “Unbreakable Kimmy Schmidt” star Kemper was overlooked here last year even though her show got an Outstanding Comedy Series nomination, but she should make it this year. Bloom is more of a longshot, but we’re guessing the bravura achievement of pulling off a one-hour musical every week will work in her favor.

The last spot could easily go to Constance Wu from “Fresh Off the Boat,” Aya Cash from “You’re The Worst” or Gina Rodriguez for “Jane the Virgin,” but we’re guessing it’s nabbed by Tracee Ellis Ross for “Black-ish.”

This is another category where the defending champ is from “Veep,” and will certainly land another nomination (though the show could easily supply 2-3 more nominees, among them Hugh Laurie and Kevin Dunn).

The days when “Modern Family” would grab three or four nominations here are gone, but Burrell ought to hold down the fort for the one-time category juggernaut. Burgess has heat and voters love Braugher.

The last two could go to Louie Anderson’s hysterical but unwinking drag performance in “Baskets,” to Adam Driver in “Girls” or to a heavyweight like Malcolm McDowell in “Mozart in the Jungle” or Laurence Fishburne in “Black-ish,” but we suspect that Miller will get in because he had the juiciest role on “Silicon Valley” this year, and last year’s surprise nominee Key will punch a return ticket because it’s the last chance to recognize the departed “Key & Peele.”

Good luck, newcomers. Last year, the TV Academy’s rules about close votes pushed this category to a full eight nominees, and all eight of those women are once again eligible. Defending champ Janney, who has a chance to set a new record for Emmy wins by an actor, is locked in, and three-time nominee Chlumsky and five-time nominee Krakowski seem safe too.

Assuming the category goes back to the traditional six nominees, a stellar season should give the edge to one “newcomer,” Light, while McKinnon’s MVP work on “SNL” may stand out enough to get her a nod. The last spot could easily go to Mayim Bialik for “The Big Bang Theory,” Gaby Hoffman for “Transparent” or Niecy Nash for “Getting On,” all of whom were nominated last year – but old habits die hard, so we’re thinking that “Modern Family” will get another supporting slot, with Bowen landing her seventh consecutive nomination.