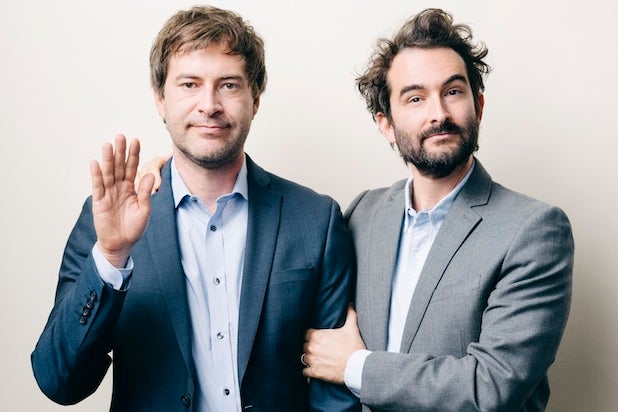 This interview was conducted for the Comedy/Drama Series issue of TheWrap’s Emmy magazine.

Mark and Jay Duplass made their names in independent film, directing movies like “The Puffy Chair” and “Jeff, Who Lives at Home” and producing and acting in a variety of other projects. But the two are now making their mark in television as well. Jay has a recurring role on “Transparent,” Mark is a regular on “The League,” and together they write, direct and produce the HBO series “Togetherness,” on which Mark also appears.

The story of a thirtysomething married couple (Mark and Melanie Lynskey) and two of their single friends (Amanda Peet and Steve Zissis), the dark comedy mixes humor with uncomfortable insights into relationships.

TheWrap: Why did you move to TV? Did HBO come to you?
Jay Duplass: it wasn’t like they were pounding down our door, but we had had meetings with them and we liked the executives. And when we had the initial idea it felt like it was probably more than a movie. We thought TV would be a good place for it.

And honestly, we were frustrated with what we call the middle class of independent film, the kind of movies you make on a similar budget to what we made “Togetherness” with. They’re just not really being made, or not being made in a friendly way. It all just seemed to be a confluence of things pushing us toward TV.

And it clicked in our minds when we decided, we’re not just going to do a showrunning thing, we’re gonna really own this. We’re going to write and direct every episode, we’re going to treat it like a movie – then it seemed like we could do it.

Did the idea come to you independent of where you were going to go with it?
Mark Duplass: Yeah. When we were 25, we made the movie “The Puffy Chair,” which was about being in a relationship for a while, and then realizing, we’re not getting any younger — we either need to break up or get married. And the general sense was that a lot of our friends were going through the same thing.

Jay: Or you were in your late 30s and you hadn’t found that person, and you were terrified.

Mark: Yeah. In Steve [Zissis]’s case, he was in his late 30s, he had no career prospects, no relationship prospects, and he thought, I’m going to die with my magic in me. He was secretly envying our lives, and we were secretly envying the fact that he could do whatever the fuck he wants during the daytime. All these stories kept coming up. It was these two worlds colliding, and everyone we talked to could relate to it.

Was it clear to you that the stories needed to play out over more than the two-hour running time of a film?
Jay: We probably could have jammed it into two hours if we needed to, but it felt like it could play out over longer than that, and we got excited about the breadth of the stories and the journeys they could go on. We got excited about the idea of four main characters, and giving them time to develop. And now that we’re getting into the second season, we have all this money in the bank in terms of backstory and exposition and time with these characters, as opposed to every time we start a new movie, when you’ve got to set the whole ship up again.

You said you were going to treat it like a movie – but 11 episodes is two-and-a-half or three movies. But nobody does that in a year.
Mark: It’s more manageable than it could be, but we get a little beat up.

Jay: We’re tired, for sure. It helps that our studio is Sunset Bronson, we live on the east side, it’s very close to us. The show is set in Eagle Rock, I live in Eagle Rock, Mark lives in Los Feliz, the world is our world. So when we have to location scout, it’s not we have to go find a children’s play area, it’s, “Let’s go get Peekaboo Playland.” We really try to write for things we know. But it is a huge amount of work.

Mark: We don’t work full time all year round, but we do work all year round on the show. But it’s different at different times of year, you know? Like, it’s hard right now when we’re in production. There will be a moment when Jay and I will be on our other TV shows – I’ll be on “The League” and Jay will be on “Transparent,” and episodes won’t be edited yet so we will be watching cuts of the show in our trailers, or on our iPads as we’re getting our makeup done on our other shows. We’ll be sending each other five-minute clips of scenes that we can watch on your phones while we’re on set. It’s just the life we kind of live for a little while.

Jay: And then there are periods we can slow down a little bit.

Mark: But in general, we’re just as this phase in our lives, we’ve got young kids, we’re so lucky to have success, so we’re just kind of gobbling it up right now.

As storytellers, what are the advantages to television over film?
Jay: Once your first two episodes are set up, you don’t have to do a lot of work at the beginning of each episode. You definitely set up the scenarios, and you have plots that open and close in each episode or string out or several. The great joy for us is being able to do really subtle stuff, because people know who our characters are.
And the other thing is, there’s a lot less emotional artifice in this serialized, ongoing TV format. We have worked our asses off with our movies to try to close storylines and close emotional arcs, which doesn’t really happen in real life. People just keep going.

Jay: People are always thrilled with how we close storylines in our films, because we’re obsessed with it. They tell us, “That felt unbelievably genuine,” and still in the back of our heads we’re thinking yeah, we had to cheat and force it.

That’s the big thing that swept us off our feat. We really get to let this stuff play out the way that it does in life. Sitting, and not knowing and cliff hanging, that’s what we live for, and that’s your job as a serialized TV creator.

When we spoke to “Mad Men” creator Matt Weiner last year as he contemplated the end of his show, he talked about how ending stories goes completely against the grain in TV, where the goal is usually to keep them going.
Jay: Ending stories is anathema to the process in TV.

Mark: The image that always comes to my mind is in “E.T.,” when ET had the little balls for planets, and he throws them up in the air and they stay there. Your job in TV is to get them up there and have them stay.

Jay: Do not let them land, and do not let anyone catch them.