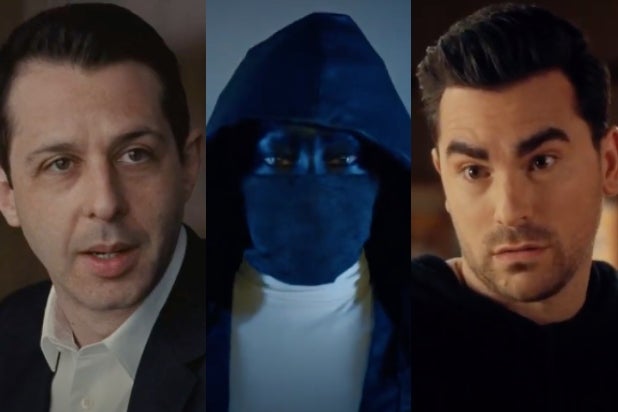 The virtual Emmys are in the books, and in a first for 2020, not much went wrong! (Especially for “Schitt’s Creek.”)

Sunday’s first trophy went to Catherine O’Hara, who won Outstanding Lead Actress in a Comedy Series for the final season of “Schitt’s Creek.” The Pop TV sitcom (by way of the CBC) then won the next six awards.

You read that right: “Schitt’s Creek” won all seven of its seven possible Emmys tonight. Insane.

The final Emmy of the evening, Outstanding Drama Series, went to HBO’s “Succession.” Showrunner Jesse Armstrong also won for writing on the series, and star Jeremy Strong took home (OK, so he was already home, like everyone else) Outstanding Lead Actor in a Drama Series. Additionally, Andrij Parekh won an Emmy for directing on “Succession.”

See all of the night’s winners and nominees below.

Outstanding Comedy Series
“Curb Your Enthusiasm”
“Dead to Me”
“Saturday Night Live”
“Insecure”
“The Kominsky Method”
“The Marvelous Mrs. Maisel”
“Schitt’s Creek” *WINNERS
“What We Do in the Shadows”

Also Read: Ramy Youssef Shows How Awkward It Is to Lose an Emmy During Virtual Show (Video)