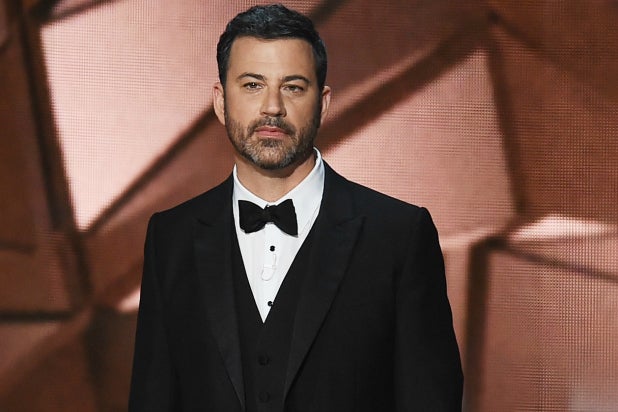 NBC’s “Sunday Night Football” sacked ABC’s Emmys last night; broadcast’s No. 1 series had the same treatment for the awards show when it was on Fox last year.

Both the pro pigskin stuff and the best-of-television celebration aired live last night, so they’ll be adjusted up from the below numbers. The One-Two order won’t change, however.

Click here to read the earlier metered market household numbers for the Jimmy Kimmel-hosted Emmy Awards. The special is on pace to hit record low numbers when final tallies come in shortly.

NBC was first in ratings with a 6.0 rating/19 share in the advertiser-coveted 18-49 demographic and in total viewers with an average of 16.9 million, according to preliminary numbers. “Football Night in America” at 7 p.m. had a 2.8/10 and 8.7 million viewers. Another half hour at 8 put up a 5.4/18 and 15.7 million viewers. followed, pulling the average up through the duration of primetime.

ABC was third in ratings with a 2.2/7 and in viewers with 8.9 million. The Emmys red carpet at 7 had a 1.3/4 and 6.3 million viewers. The actual awards show pulled that up for the rest of primetime. Adjust fast nationals for the special should be in soon, so stayed tuned to TheWrap‘s home page for those.

Also Read: Emmys Firsts: Who Took Home the Gold for the First Time This Year? (Photos)

Fox was fourth in ratings with a 0.8/2 and fifth in viewers with 1.9 million, running repeats.

Telemundo was fifth in ratings with a 0.7/2 and fourth in viewers with 2 million.

Univision was sixth in ratings with a 0.4/1 and in viewers with 1.4 million.