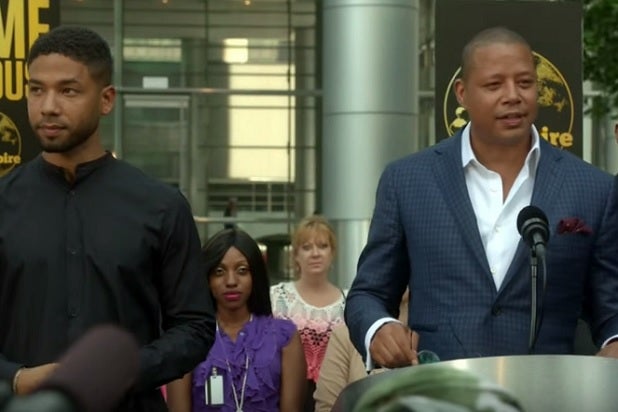 Lucious Lyon made his triumphant return in Wednesday’s episode of “Empire,” and he was definitely ready for battle.

“I would say Lucious wasted no time when he finally made bail to come out swinging at everyone who wronged him,” series co-creator and executive producer told TheWrap.

The patriarch of the Lyon family went straight to business, which included shunning his son Andre for his role in the attempted hostile takeover of Empire. Lucious is likewise unmoved after Andre tells him that his wife Rhonda is pregnant. Yet despite his father’s coldness, Andre is still desperate to return to Empire.

“I think Andre’s heart lies with Empire,” Strong said. “He feels a major sense of outrage that his father wanted his brothers to have it and not him, when he’s the one who went to business school. And I think deep in his heart, that’s what he’s always going to want.”

“Normally I hate giving anything away, but in this case I will say his intentions are not vengeance against Frank,” Strong said. “He sees a true talent…It’s very meaningful to him because she has a background that is very similar to him, which is completely different than even the background of his own children who grew up very wealthy.”

Yet despite that willingness to bring up a young talent, Lucious is still the cold-hearted man fans have come to love. He crushed Hakeem and Cookie’s plan to break out their new Latina girl group by not only buying out the radio station that was going to feature the group, but signing away lead singer Valentina (guest star Becky G) as well

“When we did our table read–and quite often the actors don’t read the script before the table read– it’s really funny to watch them respond to the episode in real time,” Strong said.

“And I remember when we got to that moment and Lucious walks in and he’s stolen Valentina. Jussie’s eyes just bulged wide open. He couldn’t believe that Lucious had done that. So I was like, ‘Yeah, this is going to be a great moment.'”