When Disney’s animated marvel “Encanto” was released into theaters this past Thanksgiving, it quickly became a favorite of those who saw it. It was the kind of Disney film, full of lush visuals and memorable songs, that fans wanted to watch over and over again, like how many used to wear out their VHS copy of “Aladdin” or “The Lion King.” Now, thanks to “Encanto” dropping on Disney+ today for all subscribers (as well as across digital platforms), that kind of repeat on-demand viewing is possible — or for those who missed it, a first-time viewing is extremely convenient.

To mark the occasion, TheWrap spoke to directors Byron Howard and Jared Bush and co-director/co-writer Charise Castro Smith about the movie making its Disney+ debut and the response the film has gotten since opening last month.

“Encanto” tells the story of the Madrigal family, who live in Colombia in the first part of the 20th century. Thanks to some real magic, each member of the family is blessed with a special gift. That is … everybody except Mirabel (Stephanie Beatriz), who never got a gift. On the night that one of her young cousins is scheduled to receive his gift, Mirabel gets a startling vision of the future. Could the magic that sustained her family be slipping away? It leads Mirabel on a journey inward, to uncover the mystery of her family and save them all from destruction (unlike typical Disney quest movies, she stays in her own house the entire time). Featuring some truly toe-tapping musical numbers set to new songs from Lin-Manuel Miranda (who also contributed to the story), “Encanto” will undoubtedly be an event for the family, even if they’ve already watched. 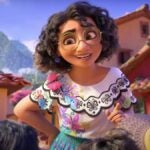 Howard told TheWrap he was “super excited” about the hybrid release – the initial theatrical event followed closely by the Disney+/home video drop. “It’s sort of the best of both worlds. I mean just the fact that it’s showing up right on the holiday, Christmas Eve is great and my family’s going to watch it with me on Christmas Eve on Disney+,” Howard said. “I think that’s awesome to just be able to even remotely bring families together over something that’s so full of joy and it’s a good holiday movie. I think it’s got a good vibe to it.” (This is especially true with Christmas plans being scuttled last minute due to rising COVID numbers.)

There might be some special features along with the digital release, but the filmmakers are unsure about what made the cut. And what they want to make the cut. “Well, I was going to say some of the hard choice about what to include in the cut scenes is that some of the scenes that got cut are so funny and good that they would make a good short,” Howard said. To which Bush quickly interjected: “I wasn’t going to say that out loud Byron, but yes.”

Of course, in the weeks since the film was released, many people have reached out and shared their own stories with the filmmakers, something that they appreciate endlessly. “It’s been amazing and it’s just really wonderful,” Castro-Smith said. “I think I’ve just heard a lot of friends and families telling me about how this movie has like sparked conversations between parents and kids about different aspects of family and relationships in a way that I think is really cool and beautiful and heartening.”

For Bush, some of the surprise has been who viewers are identifying with. “I would say one of the things I was not anticipating was the way that I’ve seen the internet claim Bruno and Camilo and the deep love for those characters is amazing. I’d say the deep desire for more content from them, from Dolores as well, these are all characters that we love to hang out with, but yeah, I’d say there’s some very excited folks that want to see more and that’s honestly exciting because some of them don’t have a ton of screen time,” Bush said. “But knowing that this is such a fun family, it’s nice to see people grabbing characters that they really care about and wanting more.” 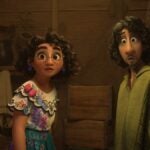 Castro-Smith had an interaction with a viewer from Colombia that left her deeply moved. “I think one of the most powerful moments I’ve gotten to experience on this film was we had like a screening in San Francisco, with an audience Q&A and this person came up at the end, and he got on the mic and he was saying he was from Columbia, and how much he felt seen by this movie and how much he felt like it really captured the story of his family and his country and all his joys and complexities,” Castro-Smith said. “I think those moments are really just extraordinarily moving to me. It’s really cool to see how it is impacting people in that way.” Howard added: “Columbia deserves to be represented in an amazing way. We had such warmth and kindness and love showered on us for working on this movie and our Columbian teams. And we really wanted our Columbian friends to be proud of it. So we’re very, very happy with the reaction.”

And the debut on Disney+ and digital will undoubtedly spark more of these conversations between families, about their own dynamics and about their favorite characters in the film. Even moreso if they have a tie to the rich cultural heritage of Colombia. Such is the magic of “Encanto.”

“Encanto” is available on Disney+ and across digital platforms now, and is still playing in theaters nationwide.