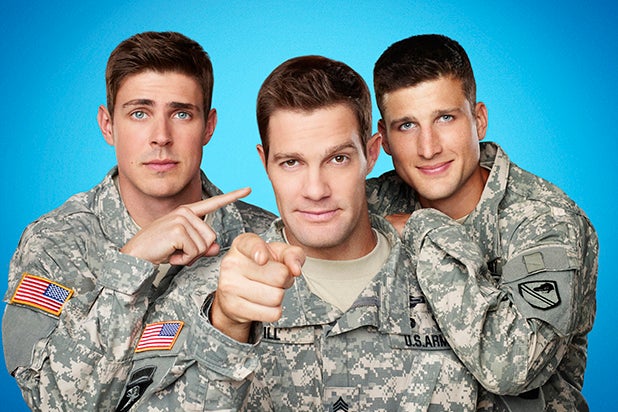 “Enlisted” was a short-lived sitcom on Fox that racked up quite a passionate fanbase in its short run. And that fanbase is the latest to follow in the great tradition of fans taking it upon themselves to try to save their beloved show.

The focus of their campaign is on Yahoo Screen, Yahoo’s online streaming service that recently made news when it picked up “Community” for a sixth season. Sensing a kindred spirit in NBC’s own often in-danger show with an intense online following, “Enlisted” fans are pitching the idea of a “Community”/ “Enlisted” double feature to Yahoo Screen.

“RT this if you would watch a #Community #Enlisted Double Feature on @YahooScreen,” reads one tweet from Carl Brand, who tweets as MyVogonPoetry and who’s one of the brains behind this operation.

Brand told TheWrap Wednesday that while fans have been looking for a new home for their dearly departed show ever since Fox canceled the Army-set comedy in May, this particular campaign aimed at Yahoo Screen came to fruition after the streaming service stepped in as the savior of “Community” on Monday.

“Much of the fan base would love ‘Enlisted’ to find another network home but that is probably not a reality,” Brand said. “Yahoo Screen is so new that a property like ‘Enlisted’ would give credibility and deliver an audience that is engaged online.”

“Community” averaged a 1.5 in the advertiser-coveted 18-49 demographic over the current season — its final one on NBC. “Enlisted” — a Friday show — averaged a 1.0 in the key demo. Both numbers are per most current Nielsen data, live plus seven day measurements.

As for how the Kevin Biegel and Mike Royce sitcom, starring Geoff Stults, Chris Lowell and Parker Young, built up such a passionate fanbase in such a short amount of time, Brand has some theories: “It can be funny and touching (sometimes in the same scene), the cast has great chemistry (and are great with fans online), it deals with issues in the military like PTSD without being melodramatic… and it is a show that I can watch with my six-year-old and not worry about it being raunchy.”

Brand also credits his fellow fans for the sense of community, calling them “engaged, crazy loyal and respectful and that is part of the fun too.”

Yahoo and 20th Century TV have not yet responded to TheWrap’s requests for comment.