Folks — how great was the "Entourage" finale last night? That Matt Damon — we always thought he was a nice guy. Turns out he’s really mean. And aggressive. In the name of raising money for his kids charity, onexone. As if that’s any excuse.

I mean, the guy scowled his way  through the entire episode. (Even meaner than he was as Tom Ripley, and that guy’s a serial killer.) And he badgered that nice Adrian Grenier into giving lots of money ‘for the kids.’

Come to think of it, Bono was pretty mean, too.

So I called Doug Ellin, the executive producer on "Entourage," to ask him how he got old sourpuss to do his show. After all, we know that agents beat a line to Ellin’s door begging for cameo appearances.

Matt — yeah, sure, he is a movie star technically. But obviously he needed some exposure.

Here’s what Ellin said: Matt was a fan. And he said he’d do a cameo if he could talk about his charity.

In Hollywood, there’s nothing warm and fuzzy about charities. When you get "honored," it not only means that you  are expected to give money, but you are expected to raise money. On the show, Matt tells Adrian that $10K was not a sufficient sum “for the kids.” He needed to pay up $1.50. (That’s $150K for those not in the $20 mill category.)

“When you see these celebrities in these charities,  they get very aggressive. You feel uncomfortable if you don’t give all your money away,” said Ellin. 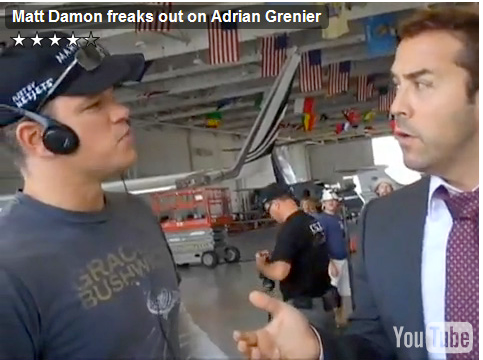 The bit ended up including LeBron James, with the refrain that everyone’s doing it “for the kids.”

“’For the kids’ was in the script once or twice — and then on the set we said, ‘Let’s keep saying it ,’” said Ellin. We’ll see if that makes it into the cultural bloodstream.

This was the part I really didn’t know: Matt’s charity is an actual, real thing. So check it out.