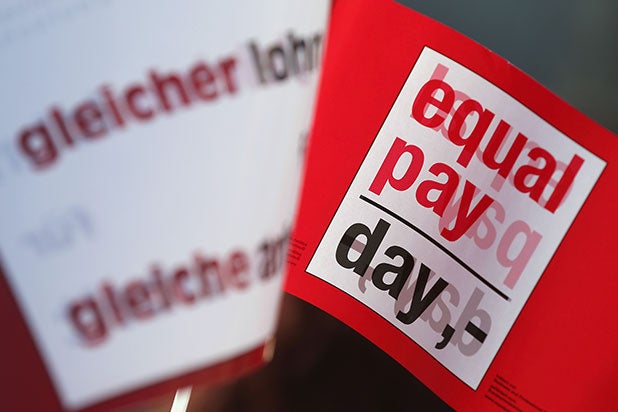 While many people are taking to social media to voice their support for action on wage inequality, some took to Twitter to debunk the so-called “myth” and “joke” that is the pay gap.

“#EqualPayDay what a joke. Women get paid the same as men and there is so much evidence to prove it. Anyone who says different is lying,” one Twitter user wrote.

“That #EqualPayDay is a total fraud is easily proven, as is the phony 79% statistic,” wrote radio personality Neal Boortz.

Other people who don’t believe in the gender pay gap called the issue “nonsense,” “a lie” and an argument that is “flawed and invalid.” Many also replied to Bernie Sanders’ tweet, claiming that wage inequality is “bollocks.”

April 12 marks Equal Pay Day, a date determined by how much of the year a woman would have to work to earn the same pay as a man in the previous year.

See some of the tweets below.

your arguments are flawed and invalid, and everything you bring up has been debunked. #EqualPayDay

#EqualPayDay what a joke. Women get paid the same as men and there is so much evidence to prove it. Anyone who says different is lying.

The wage gap is a myth. If it was true then businesses would never hire men to do anything. Use your brains people. #EqualPayDay

My female co workers are paid the same per hour as me .stop trying to lie #EqualPayDay

The Wage gap is a myth no matter how famous or smart the person that tells you it's real. #EqualPayDay

Daily reminder that the wage gap is a debunked myth. Fact. #EqualPayDay,

The women complaining are all news reporters, liberal arts majors, journalists. None of them do heavy working messy jobs.#EqualPayDay

The wage gap is a LIE and has been debunked COUNTLESS TIMES!! Stop spreading false information. #EqualPayDay https://t.co/Qly9TUtUpL

@osnapitsal @BernieSanders sorry bernie the wage gap is a myth. I like you but wage inequity is bollocks

That #EqualPayDay is a total fraud is easily proven, as is the phony 79% statistic.

On #EqualPayDay I should be paid what a male brain surgeon receives. I have the qualifications – a diploma in feminist body aura science.

Get a real degree. Woman studies will never get you a paycheck as a doctor or an engineer does. #EqualPayDay

Having the same job title doesn't qualify you for #EqualPayDay. But honest debate is just too hard for many people.