Erin Andrews’ much-anticipated appearance on Oprah aired today. It was rather short and unrevealing – Oprah had two other guests as part of her “Exclusive Summer Headlines” show. And considering how coveted an interview with Andrews --  the target of a profoundly creepy, surruptiously-shot hotel-room video -- was a month ago, Oprah's performance here (unlike, say, James Frey) was rather disappointing.

ESPN’s sideline reporter told Oprah that the interview would be the first and last time she’ll talk about the incident: “I didn’t want to do an interview at all, to be honest,” she said. “I just wanted to go back to work.”

Below, the key quotes. 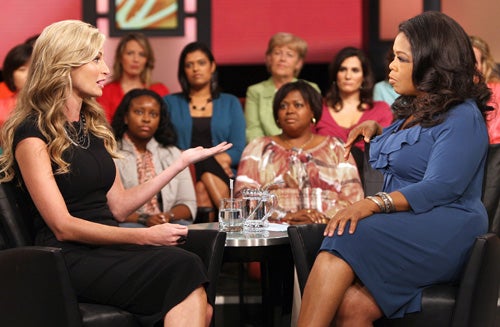 On seeing the photos for the first time:

“I opened up the computer, could hear my heart pounding, saw it for two seconds and got hysterical.”

On the call to her parents:

"I kept screaming: 'I'm done. My career is over. I'm done. Get it off. Get it off the Internet!’ … They thought I was physically injured, [that's] how bad I was screaming."

On the resulting paranoia:

“If I'm in a hotel or in my house, I feel like I'm being videotaped.”

“I do know that I am a victim of a stalker, because we know that this happened in at least two rooms. I was getting ready to go work a college football game in at least one of the videos I was able to identify.”

Will ESPN Ban Conan Over Peephole Joke, Too?