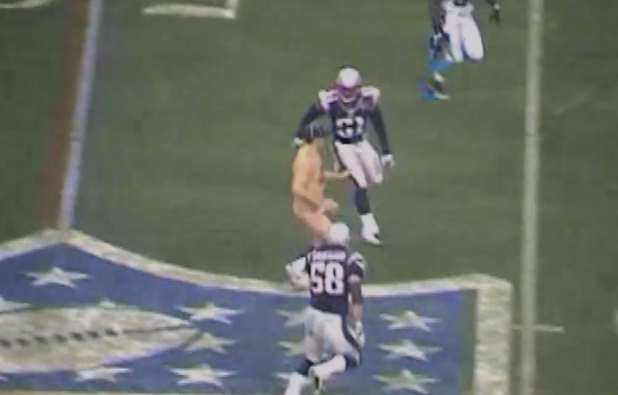 It’s Errol Morris week on Grantland, the ESPN-owned website operated by Bill Simmons, and with it comes six new short films from the Oscar-winning documentarian behind “The Fog of War,” “The Thin Blue Line” and “The Unknown Known.”

One of the many things I love about Grantland is its willingness to experiment when it comes to content. On first glance, the sports-heavy website would seem to be one of the last places on the Internet to dedicate a week of coverage to Morris, who doesn’t exactly make the type of Happy Meal movies that Hollywood loves to advertise on ESPN. However, guided by Simmons, Pulitzer Prize-winning film critic Wesley Morris and a team of wonderful writers, Grantland has done just that.

The highlight of the six-picture slate thus far has been “The Streaker,” which follows Mark Roberts, who for the past 22 years, has been interrupting events in the nude, most notoriously the Super Bowl, where he snuck onto the field dressed as a referee and danced at midfield before a massive football player took him down. In fact, when Janet Jackson had her famous wardrobe malfunction, Roberts was nearby warming up for his own.

Also Read: Bill Simmons Gets ‘Grantlandish': I’m Creating Show That Is Different From Every Other Show on ESPN’

“I just want to give people something to smile about,” Roberts says with a mischievous grin. While some people are offended by streakers, I’m rather entertained by the ensuing chaos, so long as he stays away from the Scripps National Spelling Bee and the Little League World Series.

Earlier this week, I also watched “The Heist,” which is told from the point of view of an anonymous former Duke student who helped steal Michael Jordan’s famous #23 jersey from the rafters of UNC’s Dean Dome in 1998. Imagine “Ocean’s 11” with four diehard Duke fans who have imagination in place of criminal experience.

I plan on catching up with “The Subterranean Stadium,” about a group of New York guys who still play electronic football, and I eagerly look forward to “Being Mr. Met,” which reveals the beloved New York mascot’s greatest secrets, including a threat from the Secret Service not to approach President Clinton during a game.

Friday boasts a dual premiere of “Most Valuable Whatever” and “Chrome,” the latter of which tells the story of Triple Crown-winning horse California Chrome. Meanwhile, “MVW” examines one of Simmons’ favorite hobbies — collecting unusual sports items — which in this case includes oddball objects such as Ty Cobb’s dentures and the jersey Mark Sanchez wore during his infamous Buttfumble in a Thanksgiving game between the New York Jets and the New England Patriots.

Errol Morris Week also includes a candid interview with the filmmaker as well as an essay from Morris (Wesley, that is) about the director’s body of work thus far. The project hails from ESPN’s Exit 31 content group, and all six shorts were produced by Moxie Pictures in association with Wieden + Kennedy Entertainment. They first aired on ESPN last Sunday night as part of a new primetime special “It’s Not Crazy, It’s Sports,” which took its title from the network’s long-running brand campaign of the same name.

“Sports, as we all know, touches on everything,” Morris said in a recent statement. “It provides a way in to our culture and to our dreams. Each one of the six short films involves an obsession –– whether it is about a horse, an electric football game, or a sports reliquary won at auction. They are all human stories, and it is my hope that we can recognize part of ourselves in each one of them.”

At a time when many websites are content to publish stories based on social media trends, Grantland should be commended for daring to do something that Hollywood is often chastised for not doing — telling fresh and unique stories via original content.

Click here for all the goodies Errol Morris Week has to offer at Grantland.