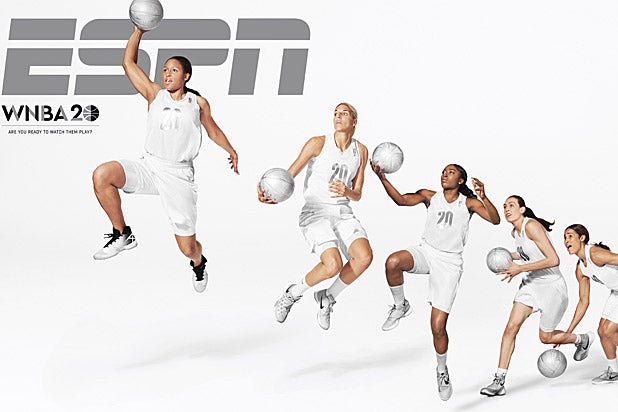 With the 20th season of the WNBA about to tip off, ESPN the Magazine is honoring the milestone anniversary with its first issue dedicated to the women’s basketball league.

The historic WNBA20 issue not only previews the 2016 season’s most compelling matchups — such as Saturday’s game between defending champions Minnesota Lynx and the Phoenix Mercury — but also the deeper issues of gender, diversity, salary disparities with the men’s league, the pressure of being the No. 1 draft pick and why some players are spending the off season in Russia.

Inside the magazine, writer Steve Wulf recalls that “the whole WNBA thing started 20 years ago with a ball that looked like breakfast (orange and oatmeal) and a slogan that made grammarians lose theirs: ‘We Got Next,'” back on June 21, 1997, when the Los Angeles Sparks hosted the New York Liberty at the Forum in Inglewood, California.

Two decades later, stars like Skylar Diggins and Elena Delle Donne have become role models for both male and female fans around the world.

TheWrap spoke with ESPN the Magazine and espnW editor-in-chief Alison Overholt about the past, present and future of the WNBA, plus its impact on a generation of female sports fans.

TheWrap: Aside from the 20th anniversary of the league, why is this the perfect time for a WNBA-themed issue?
Alison Overholt: We did it because of the anniversary, but also because it feels like we have been going through a pretty significant change over the last few years as a culture in general. There are a lot more conversations now — not just in sports but across the board — about how important it is to embrace diversity, not simply as a statement of belief but because it makes us all stronger. Diversity leads to innovations, whether business innovations or social progress, and we are finally getting our heads around the idea that the more different voices you bring into the conversation, the more vibrant and wonderful the end product becomes.

It is an exciting time because there is an entire generation of young people who have grown up knowing that women are professional athletes who can make money out of this sport. There is a real “before and after story” to tell — those of us who are older remember there was a time when people thought it was foolish for women to make money from professional sports.

Throughout the issue, we included sprinklings of comments from 18 year olds who have never lived in a world without a women’s professional league. The interesting lens through which they see the league is very different to some of our hard-boiled reporters, who’ve spent the last 20 years critiquing it. You see it through the eyes of these teenagers, who have set their standards and based their goals on knowing this league exists. 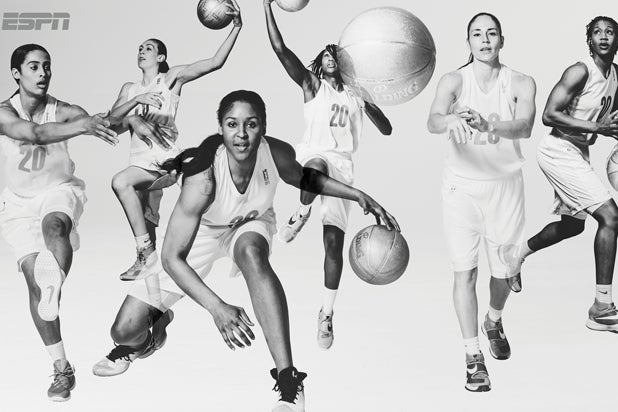 How has the WNBA impacted women’s sports in general?
Once you have a league that has been able to exist and grow, it sets a standard for others to follow. Each group that comes afterwards has a model of success — one that pays players and brings in fans. Without the WNBA, do you have the women’s pro hockey league? It opened the doors for everyone to imagine what is possible when you see that even one has made it.

In the issue, you examine both the shining achievements of the WNBA and some of the ongoing struggles it faces, why was that so important for the magazine?
It is not meant to be a pure celebration or commemoration, but a real critical look at the WNBA at 20. There is a tremendous amount to celebrate, but we also have the responsibility to look at the reality of what it is like for the players — it is not all sunshine and roses. The joy and the glory is here, but on the flip side you have to ask: “What is that experience really like?”

We have a story in the issue that examines what some people call the “savior complex” of the league — where every year, there is a star who is drafted No. 1 [this year it was Breanna Stewart to the Seattle Storm] and there are so many expectations on this person’s shoulders. Are they going to be the star who will break through for the WNBA and make women’s basketball players pop culture icons like so many male athletes are?

The draft is so wonderful but the pressure is so intense — and is that as good as it gets? What is the reality of playing in a league that is not swimming in funding or as hugely successful as other sports leagues? The fact is, this is still a young league in its infancy and there is a long road ahead.

That struggle is detailed in Kate Fagan’s feature, “Lost and Found in Russia,” which follows Brittney Griner and Diana Taurasi as they play in Russia during the offseason to boost their WNBA salaries. Is that typical?
Interestingly, for women’s basketball players, there has been a much longer history of playing overseas. We get to see the life they lead in another country — where on the one hand it can be socially isolating and there is the language barrier and cultural gulfs, and on the other, the salary is much higher. It is really interesting to see that juxtaposition. 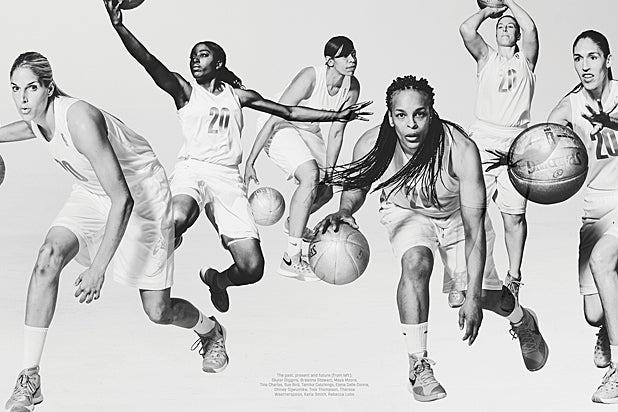 As well as fascinating to read, this issue is visually stunning. Why was it so important to capture these women in action rather than in typical portrait shots?
What we talked a lot about was how to photograph these women in an authentically powerful way, because they are strong athletes and there’s a grace and beauty that comes from the way they pursue their sport. All too often, people don’t know how to shoot women in a way that shows strength and beauty in the same artistic space. So much of our goal was how do we bring out the duality of all these women? If we come to the conclusion that women can be strong, graceful, beautiful and powerful all at once, then that would be my dream for this issue.

The photo shoots were so crazy — I couldn’t believe that we took more than 9,000 pictures. That team was so heroic as it was two days of insanity but so much fun. I have never been on a set that has been this logistically intense before, in between shots we were repainting the floor because the spray-painted balls left silver marks, we didn’t think about the fact that people sweat when they are driving balls to the hoops!

What do you predict for the future of the WNBA?
I would like to see a future where these women are evaluated on their own basis. These athletes are on their own march to greatness, so stop weighing them against the men. I would love for them to be appreciated on their own merits.

The WNBA20 issue of ESPN the Magazine issue is on newsstands now.