The ending of the 93rd Academy Awards was quite a shocker, with a run of show that shifted Best Actor to the final award of the night — prompting many to assume they did so because Chadwick Boseman posthumously was going to win the Oscar for “Ma Rainey’s Black Bottom.”

It made sense. It would have been a touching way to end the show, and to pay tribute to a beloved star who died last year of cancer.

But the assumption that they moved Best Actor to the end in place of Best Picture was based on the idea the powers running the Oscars ceremony actually knew for sure who was gonna win. And if they were hoping for a Boseman victory, they made a big mistake.

Because instead of that happening, the award went to Anthony Hopkins for “The Father.” And since Hopkins wasn’t even at the Oscars, the ceremony ended immediately after the award was announced, with presenter Joaquin Phoenix looking as confused as anybody.

It was certainly one of the stranger moments in recent Oscar history, up there at least in terms of bizarre emotional impact with that time “La La Land” briefly stole the Best Picture Oscar that actually belonged to “Moonlight.”

Naturally, that meant that just about every single person watching the Oscars immediately fired off a tweet reacting to what just happened. How could they not? 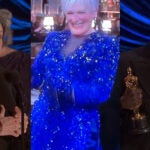 We’ve assembled a collection of those below for you to enjoy, if you wanna relive that absolutely insane conclusion to the show.