From moment one, Linklater understands how easily excitable people are in those halcyon days before classes have begun,  or hearts have been broken, or majors decided. Most of the characters that populate “Everybody Want Some!!” aren’t so concerned with what’s ahead of them, though. For now, they’ve been swallowed whole by the present, hypnotized by the promise of freedom, independence, and autonomy as they begin to create a life away from the sweet embrace of parents.

At the movie’s center is Jake (Blake Jenner, “Glee”), a handsome freshman pitcher who enters into his fraternity with subdued confidence. Rooming with his baseball teammates, it doesn’t take a long for him to forge friendships. Contrary to the intricate upperclassmen-vs.-freshmen relationships so carefully constructed in “Dazed and Confused,” the dynamics here are bit more shallow: The players bond through their self-created holy trinity of baseball, alcohol, and women.

Consequently, the movie wastes little time diverging from the obvious path, as Jake and his newfound pals embark on a quest with, essentially, one vital objective in mind: to get laid. The path to getting some leads this carnally insatiable group to familiar way stations; over the course of a weekend, Jake and his pals ride a bull at a country saloon, mosh at a punk show, and get down to some Donna Summer at a discotheque. Innumerable teen comedies have been fixated on, even propelled by, the idea of having sex, but few have been this explicit, or casual, about the desire to get between the sheets.

Inevitably, everyone involved — especially Jake, apparently acting as Linklater’s mouthpiece — begins to long for something more substantive. In turn, “Everybody Want Some!!” grants Jake’s dormant wishes in two different and unexpected ways. First he meets Beverly (Zoey Deutch, “Dirty Grandpa”), an intoxicating, auburn-haired student who sees through the empty gestures of most men her age. She’s been hurt before, and has little patience for ballplayers merely looking for a good time — except for Jake, whose reticence she finds oddly attractive. 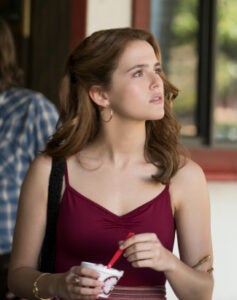 In a number of scenes between the two, Linklater evokes some of the more amorous, tender passages of the “Before” series, particularly the early stages of a relationship, before geography, children, and marriage get in the way. During a preliminary phone call between Jake and Beverly, Linklater captures the percolating elation mixed with unending nerves that accompanies the first time you interact with someone you may be into, particularly those protracted pauses that leave you unsure whether the other person is meticulously coming up with a thoughtful answer, or secretly wishing to get the hell off the phone. That first call between Jake and Beverly is uncomfortable to watch, all the more so because you’ve probably been on that same call a dozen times before.

Jake’s second revelation comes in the form of Finnegan (Glen Powell, “Scream Queens”), a smooth-talking, bookish baseball star whose dexterity allows him to win over the hearts of most women — at least for one night. Finnegan’s true power resides not in his seductive abilities, but in his clear-eyed awareness of where he is and where he’d like to go. Unlike the rest of his teammates, Finn knows there’s a glass ceiling to playing baseball. “I’m a good college player,” he admits, but not enough to make it a lucrative profession, which is why he pivoted to literature, to music, to embracing every experience and person who ambles into his life.

One scene finds Finn reading Carl Sagan, another Jack Kerouac, and his charismatic presence seems to perpetually evoke a line from Julian Barnes’ indispensable novel, “The Sense of an Ending”: “Yes, of course we were pretentious — what else is youth for?” Jake, Finn, and Beverly all dabble in the joys of undergraduate pretentiousness — rather than coming off as unbearable, though, it feels genuine, a curiosity rather an affectation. College doesn’t merely engender pretension, it accepts it, wholly and without judgement.

Linklater has built a prodigious career out of these loquacious, eloquent, dazed and confused slackers. They’ve arrived in all shapes, sizes, and genders, yet no matter the variation, there’s a through-line of goodness that permeates. “Everybody Wants Some!!” may not achieve the lasting status of some of Linklater’s more acclaimed work, but there is something wonderful in watching a movie remain joyfully plotless, as intentionally lacking in direction as so many college students manage to be before society harangues them about the importance of responsibility.

Time to settle down a little bit, get a stable job. Then marriage. Then parenthood. Then, probably, statistically, divorce. And then, ultimately, death. For now, though, in this ephemeral moment before the realities of life invade, Jake is content with wandering, aimlessly, just like this delightful, funny and insightful comedy.