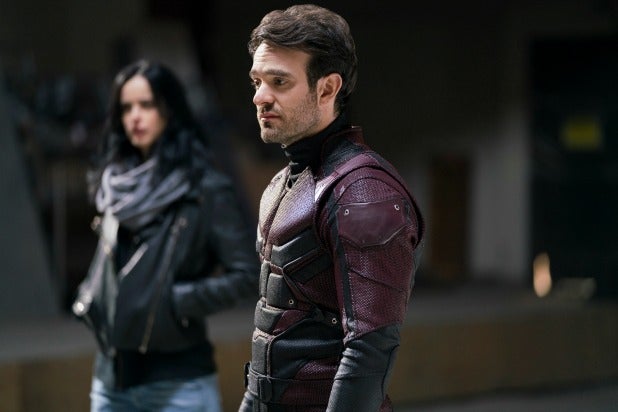 (Note: This post contains spoilers for the finale episode of “The Defenders.”)

The final episode of “The Defenders” finds Daredevil, aka Matt Murdock (Charlie Cox), Jessica Jones (Krysten Ritter), Luke Cage (Mike Colter) and Danny Rand (Finn Jones) going all-out in a battle to destroy The Hand once and for all. But in order to be sure the villainous organization is destroyed and New York is safe from its plans, the heroes have make a pretty drastic move: They’re forced to blow up a building.

Jessica, Luke and Danny manage to escape the building at Midland Circle in the final moments of the battle, but to make sure The Hand is truly defeated — along with the Black Sky, the evil organization’s ultimate living weapon, Elektra (Elodie Yung) — Daredevil stays behind. He hopes to get through to Elektra, but as Danny tells the others once they’ve escaped, Daredevil never expected to make it out alive.

Also Read: “The Defenders”: What is K’un-Lun? A Quick Explainer of the Heavenly, Mystical City

While everybody thinks Murdock perished in the demolition of Midland Circle, “The Defenders” reveals his true fate in the final moments of the show. Somehow, Murdock escaped — or, more likely, was rescued — and was brought to what appears to be a convent. The last line of “The Defenders” comes from an unnamed nun, who says to another, “Tell Maggie he’s awake.”

But just who is Maggie, and what is “The Defenders” teasing for the future of Daredevil?

Fans of Marvel’s “Daredevil” comics will likely recognize the name Maggie, as in Sister Maggie Murdock. She’s Matt Murdock’s long lost mother, who disappeared out of his life when he was a baby. Matt’s father Joe Murdock raised him until his death when Matt was a boy, but Maggie obviously joined the church.

Also Read: Here’s What You Need to Know Before Watching “The Defenders”

In the comics, Maggie also saves Matt and helps him recuperate from injuries, and later reveals why she left the family. She suffered from depression and mental illness when Matt was a baby, and felt she was a danger to her family. Maggie sought refuge in the Catholic Church, which helped her deal with her demons, but she never trusted herself enough to return to Matt and Joe.

The third season of Netflix and Marvel’s “Daredevil” was confirmed in 2016, so we know there’s more to the story of the Devil of Hell’s Kitchen. Obviously, his mother is going to factor into that tale, likely forcing Matt to reevaluate his own past — particularly now that his mentor and father figure, Stick (Scott Glenn) is dead.

But how did Matt Murdock survive the events at Midland Circle? What happened to Elektra? And how will Matt return to his life after having lost so much? “Daredevil” Season 3 reportedly starts filming in October, so it seems we’ll be waiting a while to get the answers.

Everyone Who Has Ever Been in The Defenders, From Daredevil to Doctor Strange (Photos)

Netflix's "The Defenders" finally brings Marvel's "street level" super hero team to television, but the four leads aren't the only Marvel characters who've staffed the group. In the comics, The Defenders have had dozens of incarnations over the years -- fitting since the team is defined by its lack of organization. No bylaws, just a convenient team-up of whoever is available whenever something needs stopping, even if the team doesn't like each other. Here's who has signed up as an official team member since the comic's 1971 debut.

(Note: We're not counting those who joined the team for a single battle in the 1970s, the so-called "defenders for a day.")