Jeff Zucker, CEO of NBC Universal, told employees in an email Thursday morning that "a number of possible things could happen" if part owner Vivendi sells its 20 percent stake in the company.

He did not comment on TheWrap’s exclusive report Wednesday that NBC Universal is in talks with Comcast for a potential sale. He wrote:

"Given the attractive nature of our assets, there is always significant interest in NBC Universal," he wrote in the email. "That has been amplified lately by the annual discussion with Vivendi about its 20 percent ownership of our company. Vivendi has been a superb owner of NBC Universal, along with GE, for more than five years. They have not yet made us aware of any final decisions about their future with us; should they choose to exit, there are a number of possible things that could happen."

Meanwhile, CNBC reported Thursday that the negotiations between Comcast and the entertainment company involved spinning off the unit into a new company, with Comcast taking 51 percent economic control of the company.

More to come on this story as developments arise….

Comcast, the nation’s leading provider of cable, entertainment and communications products and services, is in talks to buy the entertainment giant NBC Universal from General Electric, according to knowledgeable individuals.

Deal points were hammered out at a meeting among bankers for both sides in New York on Tuesday, executives familiar with the meeting said.

Two individuals informed about the meeting said that a deal had already been completed at a purchase price of $35 billion. But other executives said a deal was not complete, and Comcast denied there was a deal in place:

“While we do not normally comment on M&A rumors, the report that Comcast has a deal to purchase NBC Universal is inaccurate.” 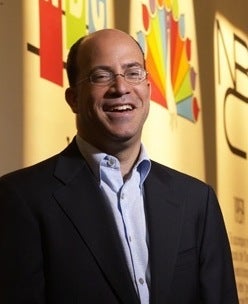 NBC Universal has been believed to be in play for months, although GE has publicly denied any intention of selling the unit. In recent weeks, minority stakeholder Vivendi has been apparently preparing to exercise its right to sell 20 percent of the entertainment company in an IPO.

Comcast has been among those rumored to be interested in buying that equity.

But the Tuesday meeting was about a much larger gambit, according to the knowledgeable individuals. The NBC Universal division of GE, a premium content company, is a likely fit for the cable giant with its massive distribution pipeline. That is especially the case when the division’s potential price tag has dropped significantly from a year ago.

Comcast’s market cap is $48.44 billion. NBC Universal has fallen in value to an estimated $35 billion, from about $55 billion a year ago. 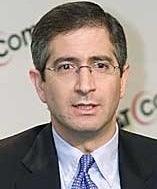 Other suitors have been rumored to be interested in NBC Universal, including Time Warner. Time Warner has denied any interest in a purchase.

The talks come after a rough summer for Universal Pictures, which had one of the worst box office runs in the studio’s recent past. And NBC has remained mired in fourth place among broadcast networks.

The message transmitted at a tense board meeting in New York in July — where top NBC Universal executives including Jeff Zucker (pictured above; at right, with Comcast Chairman and CEO Brian Roberts), Ron Meyer, Marc Shmuger and David Linde all met with GE’s CEO Jeff Immelt and Vivendi representatives — was that something had better change soon.

Earnings at the studio have been down drastically from last year for the second quarter in a row. Judd Apatow’s “Funny People" brought in only $60 million worldwide, while “Bruno" brought in the same amount domestically. On the Will Ferell comedy “Land of the Lost," Universal lost some $40 million. 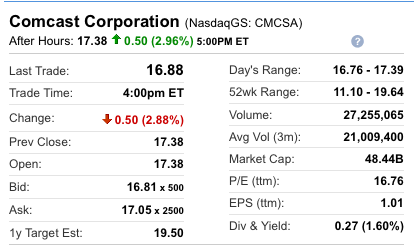 General Electric originally purchased NBC for $6.28 billion in 1985, and in May 2004, merged with Vivendi — which owned Universal Studios and cable channels USA Bravo and Sci Fi (now Syfy). (NBC bought Bravo in 2002 from Rainbow Media.)

At the time, NBC had been the only big TV network that wasn’t a part of a media conglomerate and did not have its own production studio before the two companies joined. Vivendi got $3.4 billion in cash as a part of the deal, and GE assumed $1.7 billion in debt from Vivendi.

GE took an 80 percent stake in the company and left the remaining 20 percent to Vivendi.

Under the terms of the 2004 deal, Vivendi can has the right to sell its stake, but it can only exercise its option each year from Nov. 15 though the Friday of the first full week of December.

Comcast continues on a spree of its own.

In 2001, it took on the assets of AT&T Broadband for $44.5 billion. The companies merged and retained the Comcast name.

In February 2004, the company made an $66 billion bid for the Walt Disney Co. That bid was rejected, but late that year, Comcast entered in a deal with Sony Pictures Entertainment to buy MGM and its affiliate studio United Artists.

The deal allows Comcast to carry the studios’ material on cable and online.

A top executive at a major conglomerate hadn’t heard about the talks until TheWrap broke the news on Wednesday evening.  "But it does make some sense," he said. "They (Comcast) have always wanted to be in content business — and now more than ever with their TV Everywhere experiments. Long shot– (but) it isn’t crazy."

Comcast and Time Warner recently began experimenting with a plan to give cable subscribers premium access to TV content online. The hope is to encourage consumers to use their Comcast or Time Warner broadband services to watch shows on the cable companies’ streaming services, rather than outside networks such as Hulu. NBC, of course is a partner in Hulu, so it’s unclear just how TV Everywhere would mesh with Comcast’s potential purchase of the Peacock.

Josef Adalian contributed to this report.