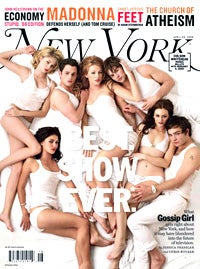 In a signal of just how obsessive television fans have become on the Web – and how important its award-winning site is to its publishing future – New York magazine has lured away editor Josh Wolk from Entertainment Weekly to head up an expansion of its TV coverage online.

Wolk, a 12-year-veteran of EW – serving most recently as senior editor – will become NYmag.com’s entertainment editor. He’ll begin his new gig on November 17.

First assignment for Wolk: a roll-out of Vulture TV Recaps, a new section dedicated to obsessive overnight coverage of hit shows like Gossip Girl and Mad Men (the site’s recaps of those shows on its Daily Intel blog routinely generate hundreds of comments).

Wolk made a name for himself at EW with his “Amazing Race” recaps, something he’s been doing since 2001.

According to traffic figures provided by the magazine, NYmag.com averages 5.5 million unique visitors per month – a quarter of which come through its entertainment channel.

According to Quantcast, the site attracted 3 million in the U.S. – 4.2 million when you count its network that includes “Menu Pages.”