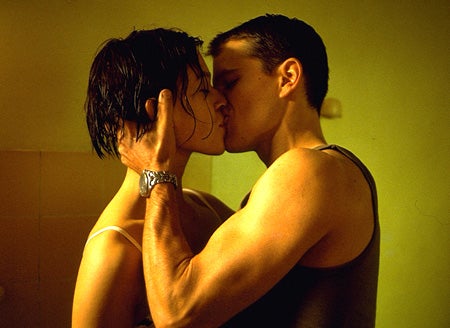 If you haven’t been following the war of words involving two prominent film journalists, it’s worth catching up. See if you can follow along.

"There’s no ‘Bourne Identity’ with a woman starring in it right now. It’s almost as if in real life, women want to be empowered and in control, but on-screen they seem to like the old-fashioned damsel-in-distress, love-struck female."

"F—. What an ass—-. Yes, that’s what I want! That’s exactly what I want. If Angelina Jolie had been cast in a movie as a good as ‘The Bourne Identity’ with a filmmaker like Paul Greengrass, I would have gone out to see it, and I’m sure I wouldn’t be alone. That is absurd. That’s blaming female audiences — you get what you deserve? Is that what he’s saying?"

"Manohla, that is not what I am saying, and you know what? I hope Angelina Jolie’s action thriller ‘Salt’ kicks ass at the box office next year. Just like you, I want to see good films that are female-centric and aren’t just romantic fluff. I want to live in a world where great films get made and are embraced by a welcoming audience; where gender matters not and where Kathryn Bigelow winds up with the Best Director statue for ‘The Hurt Locker.’ But life is not fair."

At the end of the day, however, women, just like their male counterparts, love all kinds of movies, but the box office success (primarily fueled by female audiences) of films like ‘Twilight,’ ‘He’s Just Not That Into You,’ ‘Sex and the City,’ ‘The Proposal,’ and the expected success of ‘It’s Complicated’ only embolden and validate the studios’ decision to make more movies like them.

This is not my fault. It’s just the way is the industry currently is, and if calling it like I see it makes me an ass—-, so be it."

There’s a good summary of the whole dustup on Hollywood Wiretap, although keep in mind Hollywood.com is its parent company.