What do "The Dark Knight," Tim Burton’s "Alice in Wonderland" and "District 9" have in common?

Each of those movies has broken new ground in Hollywood’s age-old fascination with Barnum & Bailey-style hucksterism, a mash-up of selling and storytelling that matured in the mid-1950s when producer Walt Disney’s visionary multiplatform, cross-promotional, merchandising extravaganza known as Disneyland took the world by storm on July 17, 1955. 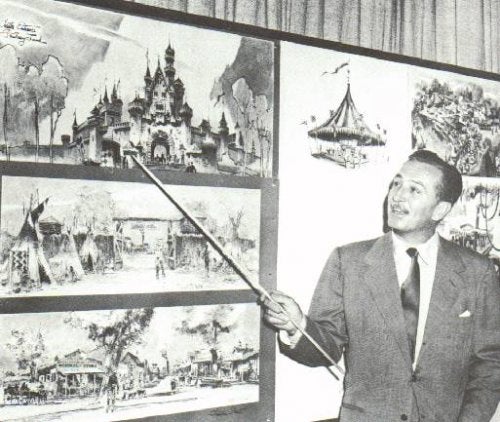 Remarking on Disney’s uncanny use of his ABC TV series "Disneyland" to pay for and promote his theme park, one industry trade critic paraphrased Churchill: “Never have so many people made so little objection to so much selling.”

The series, like the theme park, was organized around four “themes”: Frontierland, Tomorrowland, Adventureland and Fantasyland.

Invoking the interactivity and sense of play that has become a prerequisite in today’s transmedia franchises, Walt Disney exclaimed in 1955: "What youngster has not dreamed of flying with Peter Pan over moonlit London, or tumbling into Alice’s nonsensical Wonderland. In Fantasyland, these classic stories of everyone’s youth have become realities for youngsters — of all ages — to participate in."

Smash-cut to 2010 and we disappear down a different type of rabbit hole into the latest incarnation of Disney’s participatory selling machine: Disney Interactive.

Now weary of all that selling, one cynical blogger on Destructoid.com wrote: “In the interest of wringing every last drop of milk from Tim Burton’s remake of ‘Alice in Wonderland,’ Disney Interactive announced today that — you guessed it — there’s a videogame on the way. … The studio has decided to further … uh, expand Lewis Carroll’s tale by bringing it to the Wii, DS and PC, with later versions planned for iPhone, Android and other mobile devices.”

Despite the occasional naysayer, most of today’s Millennials have embraced these corporate-produced, multiplatform, interactive, digital extensions of traditional film and television entertainment.

But here’s the rub. Do these newfangled social entertainment formats and transmedia storytelling strategies represent new creative frontiers for Hollywood’s best and brightest? Or do they represent our collective descent into a new level of shopping mall purgatory — committing us to an even more insidious mode of consumer behavior disguised as play?

On March 16, UCLA and USC will co-host a one-day event featuring 20 members of the next-gen “geek elite,” who apparently have eaten some kind of mushroom, fallen down some kind of rabbit hole, and landed in a brave new world of digital interactivity and play far beyond Walt’s wildest imagination.

No longer bound by Hollywood hierarchies or geography, many of these Next Wave, T-shirt-wearing digital artists work at companies with funny names like Smith & Tinker (named after the toymaker in "The Wizard of Oz"), Campfire or Big Spaceship, and hail from such far-flung places as Bellevue, Washington; Brooklyn; and Manhattan Beach in Southern California. They are working on projects as diverse as "District 9," "True Blood," "The Dark Knight," "Buffy the Vampire Slayer" and "Twilight."

In other words, in today’s Wikinomic world of mass collaboration that changed everything, the digital workplace is anywhere you can tap into WiFi.

Among the issues to be debated is whether transmedia storytelling represents a blistering vision of the future, or just business as usual.

Why so serious? Drop in on March 16 and find out.

BIO Denise Mann
Denise Mann is the head of the UCLA Producers Program and an associate professor in the UCLA School of Theater, Film and Television. She is the author of "The Hollywood Independents: The Postwar Talent Takeover" (University of Minnesota Press, 2009).

Denise Mann is the head of the UCLA Producers Program and an associate professor in the UCLA School of Theater, Film and Television. She is the author of "The Hollywood Independents: The Postwar Talent Takeover" (University of Minnesota Press, 2009).
x
Looks like you're enjoying reading