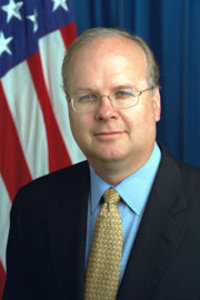 This past week I joined Facebook. Why? Same reason I started a blog over a year ago. Same reason I joined LinkedIn a few months back. People who know about this kind of stuff told me to.

Just like with starting a blog – late – I felt I was quite possibly the very last person in this country to join Facebook. (Hillary, Obama — both way ahead of me.) But today I see that, No. I’m not the last person to sign up. Right behind me comes Karl Rove, joining the world of the interconnected, signing up to a Facebook page. I learned this because – crazy, but true – we have a "friend" in common. And the friend writes that "Since Karl’s new to Facebook, suggest people he knows." (Like who? Donald Rumsfeld? He has a page, I checked.)

So it turns out that after being the quiet power running the known world from the White House for seven years, after running the Republican electoral machine for a decade, Karl still needs friends. Don’t we all? Perhaps, too, he wants to be connected, be part of that exciting new movement that is the World Wide Web. Let’s help Karl. Let’s "friend" him. It’s the least we can do.