When Abigail Cowen first read the script for Netflix’s “Fate: The Winx Saga,” she knew it was special. The show involved teenage fairies (including her character, Bloom), attending a private boarding school. But while the series had that magic supernatural twist, its group of high schoolers had relatable insecurities and struggles with growing up and finding who you are.

For Cowen, she began exploring her own special power – as an actor – as a youngster growing up in Florida. Her earliest professional acting jobs came out of the scene in Orlando, including a commercial at just 12 years old that put her over the threshold to earn a Screen Actors Guild (SAG) card, work she got after constantly begging her mom to let her get into the business. 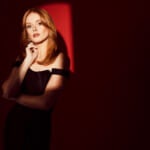 Florida eventually made way for Los Angeles, where Cowen found success on shows including the short-lived “Red Band Society” on Fox in 2014, a “Stranger Things” stint in Season 2 in 2017, a run on the ABC Family-turned-Freeform series “The Fosters” a year later and eventually the breakthrough role as Dorcas in Netflix’s “The Chilling Adventures of Sabrina.” It was on that last job that Cowen actually got the call that she’d landed the lead role of American teenager (and fire fairy) Bloom, whose powers got her noticed by The Alfea School of Magic in Solario. To say Cowen was elated might not be a strong enough word.

“I was in my apartment in Vancouver, and I got the call. I want to say I screamed. I cried,” Cowen said, recounting her reaction to the news. “It was a feeling of just like, one — I was petrified because it was like, ‘Oh my gosh, like this is real.’ And it’s a big responsibility. There’s a huge fandom. And it was [also] just a big kind of relief because I had been auditioning for years, and it was almost like a moment where dreams come true. It was a really special, special moment.”

Days later, Cowen was on a plane for Ireland to film the first season of the series, and her first major leading role. Being the lead on a show is a big responsibility for anyone, and Cowen credits her “Sabrina” lead Kiernan Shipka for setting a high standard she sought to emulate on the “Winx Saga” set.

“On ‘Sabrina’ I feel like I got a really great example from Kiernan who led the show. She never really had a complaint ever; always just had a smile on her face. And I remember being like, ‘How the heck does she do that? Like, the hours that she is working and the amount of stuff that she has to prepare,” Cowen recounted. “It’s a hard job, and you are working crazy hours and [there’s] a lot of pressure on you.

“It’s definitely a really big responsibility to have, but I feel insanely fortunate,” she added.

For Cowen, breathing life into Bloom, who has grown and matured as she found friends she could trust and rely on in Terra (Eliot Salt), Musa (Elisha Applebaum), Aisha (Precious Mustapha) and Stella (Hannah Van Der Westhuysen) and found romance with boyfriend Sky (Danny Griffin), has been meaningful. She saw pieces of her younger self in the character when she began playing her, including Bloom often being “emotionally reactive, and just trying to figure out life and trying to figure out who she is.”

In Season 2 of the Netflix series (which is now streaming), Bloom is doing a lot more of that, and while her friendships are solid, she finds herself under the watchful eye of headmistress Rosalind (Miranda Richardson), who took over the school at the end of last season, creating tension. 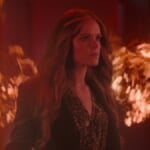 “She is insanely strict; she is almost kind of the opposite of Ms. Dowling, and does not care about a lot of the student’s emotions or well being and is very much stuck in her regime,” Cowen continued. “And that’s hard for the students to adapt to. So a lot of people are not too fond of her coming back. And then Bloom also kind of puts that on herself, and it’s her fault. But, she’s still trying to find out where she came from. And she doesn’t know if Rosalind really does have these answers or not. So there’s a lot of conflict, once again, going on in Bloom’s life.”

“Fate: The Winx Saga” Season 2 is streaming now on Netflix.