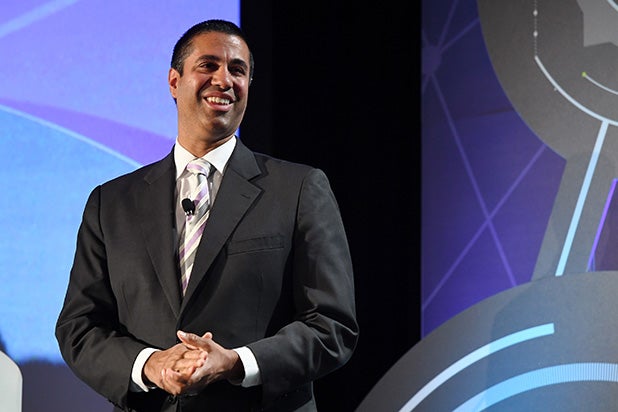 FCC Chairman Ajit Pai has responded to the stir surrounding Stephen Colbert’s “c— holster” joke on “The Late Show” earlier this week by reminding the outraged that “it’s a free country.”

“The FCC — outside of our decency rules — we don’t get into the business of regulating content,” Pai said in an interview Wednesday. “What I can say is that I realize this is a politically polarized time and I would hope that everyone can participate in the public discourse in a way that’s civil and operates in good faith.”

Pai’s comments came in an interview with Newsmax TV‘s Steve Malzberg on “America Talks Live” on Wednesday afternoon. Malzberg asked the FCC Chairman if he was “considering any action” against CBS for the raunchy joke.

“It’s a free country, and people are willing and able to say anything these days,” Pai said, referencing the First Amendment right to free speech and a Supreme Court decision limiting the FCC’s ability to sanction broadcasters for what they put on the air.

“That’s one of the things we have to respect going forward, what the courts have said about our legal power in this area,” he said. “By and large, unless it’s indecent, profane obscene under our rules or as interpreted by the Supreme court, the FCC’s authority here is pretty limited.”

The joke came on Monday’s episode of “The Late Show” when Colbert rose to the defense of his CBS colleague John Dickerson, who became the target of President Donald Trump after a contentious interview on “Face the Nation.”

“Mr. President, your presidency — I love your presidency — I call it Disgrace The Nation,” Colbert said before launching into a long string of insults that culminated in the line, “the only thing your mouth is good for is being Vladimir Putin’s c— holster.”

Colbert soon came under fire from viewers who said the joke was homophobic or inappropriate, leading the hashtag #FireColbert to trend on Twitter the following day.

Watch the interview with Pai below: