Warning that journalism and the essence of democracy is becoming endangered by media cutbacks, the acting chairman of the Federal Communications Commission today delivered a call for quick regulatory action to ensure consumers continue to be able to get vital news and information. 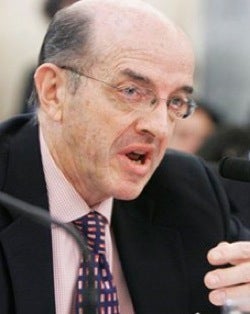 “The economy has put an end to the fundamental myth” about the wisdom of hands-off regulation," Michael J. Copps told a policy forum today in Washington sponsored by the media reform consumer group, Free Press.

While he said the winds of reform are blowing in Washington bringing the possibility of change, he warned that any action needs to come swiftly.

“If we are not quick about it, the winds of change could blow out before we are done,” he said. “We need to act while the tide is running in our direction.”

Copps was especially critical of the FCC, which he said had failed to do an adequate job of examining stations’ local commitment when renewing licenses and also failed to look at the impact of the high debts generated when media companies buy each other.

“Two decades of mindless deregulation, topped off by a veritable tsunami of consolidation have succeeded in bringing our economy low and endangering the essential civic dialog on which democracy is based,” Copps said.

“We are skating perilously close to depriving our fellow citizens of the depth and breadth of information that they need to make intelligent decisions about the future of the country. Newrooms decimated … reporters laid off … newspapers literally shrinking before our eyes … infotainment … sensationalism … cable news mud wrestling, homogenized play lists.

“Readers, viewers and listeners are citizens to be informed, not products to be sold to advertisers. When TV and radio stations are no longer required to serve their viewers and when stations and newspapers are loaded down with crushing debt or owned by huge corporations preoccupied by cutting costs to impose economies of scale, [what’s happening] should come as no surprise.”

Copps suggested that TV station licensing should take place every three years rather than eight and the FCC should take a far closer look at what stations are doing to serve the local community, but he didn’t offer specific proposals.

He said that despite conservatives’ attempt to present the concerns about media ownership as an FCC attempt to reimpose the Fairness Doctrine, an old FCC requirement that broadcasters offer equal time to competing viewpoints, no one is proposing the doctrine’s return.

He also said that while people may turn to the internet for information, they still get the bulk of their news and information from local newspapers and local media.

Copps’ concern about journalism and democracy are shared on Capitol Hill, where Sen. John Kerry, D-Mass., held a hearing last week and Sen. Ben Cardin, D-Md., has offered legislation that would allow newspapers to operate as non profits.