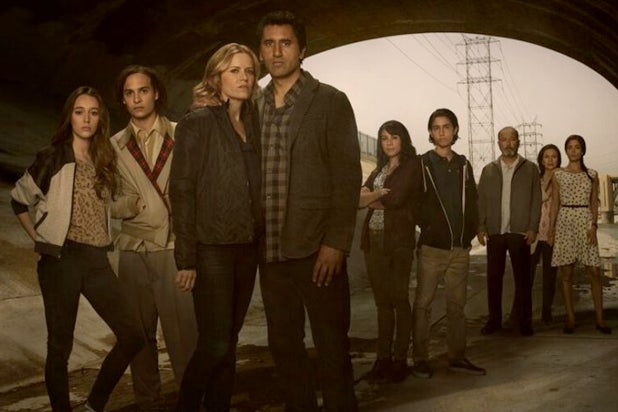 (Spoiler alert: Please do not read on if you have not watched Sunday’s season finale of “Fear the Walking Dead.)

After a slow-burn of a season, AMC’s “Fear the Walking Dead” ended its six-episode first season with a zombie horde driving the main cast onto a boat. In addition, a mysterious new character was introduced, a fan favorite bit the dust in the final minutes, and the fall of civilization became more evident than ever.

The zombie spinoff’s showrunner Dave Erickson spoke to TheWrap about the season finale’s big death, the criticisms the show has received from fans of “The Walking Dead” and what’s to come in Season 2.

Let’s start with the big death in the finale. Why did Liza (Elizabeth Rodriguez) draw the short straw on that one?
From the beginning, there were a number of people Robert [Kirkman, the show’s creator and EP] and I discussed who would survive or go away, and it all changed quite radically, but Liza was always a character we always thought would probably go. Largely because of what it would do to the rest of the characters and the family dynamic as a whole.

It creates a situation where Chris (Lorenzo James Henrie) is going to be traumatized by this and he’ll have to understand why his dad did this, and that sets up a challenge for next season. And strangely and tragically, it bonded Madison (Kim Dickens) and Travis (Cliff Curtis), because they were at a point in their relationship where he was seeing things in her that he didn’t recognize, and vice versa. And the sad reality is now they’ve shared this horrible tragedy. It creates an interesting relationship, which deepens and strengthens, heading into next season.

Strand (Colman Domingo) said he needed Nick (Frank Dillane) for some reason. Have we already seen why, or is that something for next season?
Strand’s expertise is currency, knowing what’s valuable, what value people have, what commodities are to be traded. I think he’s figuring it out right now. He sees Nick as someone with a level of resourcefulness, as someone he wants to have in his orbit. Ultimately, in the very immediate sense, what he got out of his relationship with Nick was a ride. And now he’s been exposed to Travis and Madison and Daniel (Rubén Blades), and now he has to figure out what value this group has and how they can help him. He definitely has his own agenda and his own intentions and we’ll explore those as we get into Season 2.

Did you see Season 1 as a set up to Season 2 or was this its own arc?
It was step one in the apocalyptic education of our characters. It was about bringing them down to not the absolute low, but bringing them as close as we could. Now the whole world’s going to be opened up to them.

They haven’t had the benefit of the CDC download that they had on Season 1 of “Walking Dead,” so they don’t know the world has come to an end. They’ve escaped L.A., they’ve escaped the military compound, but they don’t yet know that this is our extinction event. That’s the one layer of events that they haven’t quite encountered yet.

That’s going to be interesting heading into next season: At what point do they realize this is never going to repair itself, it’s never going to get better? Exener (Sandrine Holt) alludes to it, she says, “There’s nowhere to go.” And that’s the closest we come to somebody of authority suggesting that the world is over, but I don’t think that necessarily is going to take hold for them right away.

Will the military still be a force in Season 2 or have they pretty much disbanded as well at this point?
Well, the retreat to the desert is real. This is only two weeks into this, we’re not quite at where Rick Grimes was when he woke up in Georgia. So there’s still hold-outs, there are still cities that haven’t fallen yet. By the time we get to Week 4 or Week 5, that’s when things have completely collapsed, but from a story perspective, if we were to encounter any military figures, it would be like someone trying to get home to his own family. We won’t really see the military as a force, we won’t see a commanding officer trying to marshal troops or trying to secure neighborhoods. I think we’ve moved away from that.

How much is Season 2 going to be on the yacht and how exactly do you encounter zombies at sea?
There will be a balance between the sea work and the work on land. One thing we get to explore — we’ll discover we’re not the only people with the bright idea to survive on the water rather than on land. It’s one of the themes explored in the “Walking Dead” comic, the reality is that the real danger is other people, not the Walkers. We’ll have some opportunities with water and Walkers and what that looks like, and then we’ll be spending time on shore as well.

Can Tobias find his way on board?
There a number of characters we don’t see turn and we don’t see die, so there are opportunities for those characters to return. Morgan is a good example on the original show. I don’t think there’s an organic way for Tobias to hop on the boat, but as long as he’s alive, there’s always hope for that character.

How are you planning to address the criticisms of the show, about the pacing and some of the choices the characters make?
We’re about 12 days into the apocalypse. None of our characters have watched “The Walking Dead.” Have they seen zombie shows? Probably. I don’t think for any of our characters, unless their back is to the wall, their first instinct is to bludgeon someone who’s attacking them. They would assume there was some way to help them. We’ve passed that, definitely. They know full well these people are not coming back, they have to be put down, that part of their education has been complete. That’s just part of the evolution of the characters.

Tonally, the goal was always to start as a family drama and then evolve into an apocalyptic drama, and now that balance has shifted. We end the season with our biggest episode, the first horde. We see for the first time our characters engaged in an action sequence like this, so you can’t really turn back from that. Organically, going into Season 2, there’s going to be an understanding of what the world is, so they’re going to be behaving differently.

I don’t know if that’s so much a reaction to the criticism as much as that’s the evolution of the show. I still think tonally, it should be different and it should be its own thing. The last thing people want is to just try to do what “Walking Dead” has done so beautifully for the past six seasons. We have to continue to carve out elements that are unique to our show. There are people who like that and some people who don’t.