The star of “The Late, Late Show with Craig Ferguson” took the long road to fame from his early days in the U.K., where he carved out a career in music, theater, comedy and drinking. That last bit ended in 1992, when Ferguson noticed: “If I have one beer, I wake up in Tijuana four days later with a tattoo and a sore ass.”

He moved to Los Angeles in the mid-‘90s, snagging a role on “The Drew Carey Show.” In 2005, he took over as host of “The Late, Late Show,” three years later beating Conan O’Brien in the ratings and never looking back.

He also lent his voice to the role of Gobber in DreamWorks Animation’s “How to Train Your Dragon.”

He sat down with TheWrap to talk about the late-night wars, inspirational words from Howard Stern, Paris Hilton and why he dresses like a ‘50s car salesman.

I’d be remiss if we didn’t talk about the late-night wars. 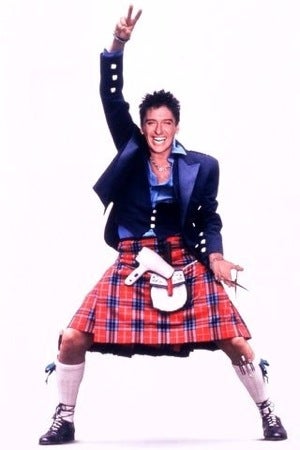 I don’t give a f— about the late-night wars. You can quote me on that. I don’t even think that I do a late night show. What I do is I do a TV show that goes on late at night. If anybody thinks I’m part of all that, they haven’t seen my show for more than five f—ing minutes. So my opinion about how the business is run is really meaningless.

It’s like everybody f—s up when you try and not be what you want to be. So here’s what I’m not. I’m not that guy. I’m not any of these dudes. I’m who I am and I do my show. And if late night is a club, then I don’t want to be a member.

What would you have done in Conan or Leno’s place? Would you have just walked away?
Yeah, I don’t care about being a f—ing late night-talk show host. What the f— do I care? I swear to God, you must hear this if you don’t hear anything else: I genuinely don’t give a f—. I do this show because I like doing it and they pay me good money to do it. I don’t define myself by being on f—ing television.

If you define yourself by being on television, you’re already f–ing lost. And if they fire me, guess what, I’ve been fired before and I’ll f—ing live.

When you came to “The Late, Late Show,” did you look at what everybody else was doing and decide to go in the opposite direction?
When I started, I wanted to fit in. It was a five-minute conversation with Howard Stern. He said, “Now look, make it your own. Make it your own or you’ll die.” And he said, “That’ll be hard.”

As I worked on the show, as I didn’t get canceled, little by little I started doing things with it. It felt like the show was becoming more mine. My show isn’t done. My show is in process and it will continue to be in process until they cancel me, as they assuredly will. 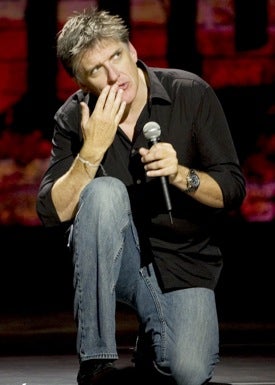 Your numbers are good!
My numbers are fine but f— the numbers. Numbers aren’t important. Jay’s numbers were great.

You seem to want to do things your own way. That can be career suicide in this town.
It’s a chance you take. There’s plenty of people that follow the rule and don’t work anyway. There’ve been plenty of times in my life where I’ve toed the line.

In “How to Train Your Dragon,” they say, “I’d like you to do this,” I do it. I’m not some unreasonable f—ing maniac. My job is to provide whatever they need at the time, then they take away and make it fit in the movie.

The nice thing about working with these guys is they kind of have a track record, DreamWorks. So you do the script, you serve the story and you also throw whatever you can add to it. Some they take and some they don’t.

That’s not true on your show…
There I do what I want. And actually, as time goes on, I want to do more of that.

Are you the next in line for when Dave Letterman retires?
I’d be lying if I said I haven’t thought about it. But here’s the thing: David Letterman does a fine job of being David Letterman. I, however, have no interest ever in my life of being David Letterman or Jay Leno or Conan or anybody else. If the network puts me on at any time of day, that’s their f—ing choice, it ain’t mine. I have no ambition to change the timeslot of my show or to see the end of David Letterman’s career. To be honest with you, I think this is my golden time.

I’d be intimidated to be a guest on your show. You have to be on your toes.
Yeah, some guests are intimidated. But my job is to make them, but not at the expense of the show. So if the only thing that makes you comfortable is me asking you about your movie, don’t come. But if you can trust the fact that I am not trying to make you look stupid and I’m not trying to make you look dumb — like, one of my favorite guests is Paris Hilton. This is not a woman who’s going to be picking up a Nobel Peace Prize. She’s not going to look any dumber on my show than she does anywhere else. So why not just f—in’ try and include her in the fun.

Do you ever have a guest who is just too slow to hang with you? Or do you ever have any get pissed off and lay into you?
They tell their publicist to lay into my people, but they don’t lay into me. They’re too smart for that. It doesn’t happen anymore. They know what they’re getting into.

I’m not trying to make them look stupid. And anyone who has the remotest sense of humor understands that if you’re talking about business acumen, you want to sell your f—in’ movie, sell yourself.

So if you come on and say, “Everybody in show business loves each other, y’know. We were all great friends on the set.” They know you’re lying. So, rather than do that, tell the truth.