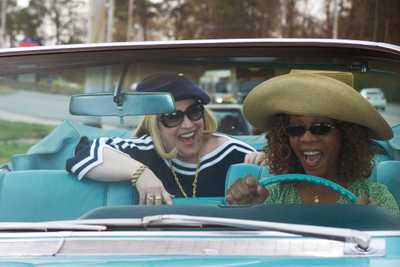 I want to be in the Tyler Perry business. This guy just can’t miss. His latest film, "The Family that Preys Together," which has been completely off the general admission radar, but is clearly anticipated in his niche audience, is estimated to nab the top spot at the box office this weekend, according to my studio sources.

Early estimates put "Prey" at $21 million for the weekend, with "Burn After Reading" close behind. And just for the record books, the film stars Perry along with a couple of middle-aged broads, Alfre Woodard and Kathy Bates – not exactly box office bait. This is after hitting it earlier this year with "Meet the Browns," starring another middle-aged hottie, Angela Bassett. Let’s hear it for middle-aged broads!

The Coen Brothers’ new oeuvre, "Burn After Reading," did strong business, considering they have never been mainstream filmmakers (although they did win Best Picture this year with "No Country for Old Men"). The spy-exercise spoof starring Brad Pitt, George Clooney and the always-sublime Frances McDormand will take in $19 million. A subtle, smart and hilarious film like this is usually doomed at the box office. Perhaps the prospect of seeing Brad Pitt in shorts was enough.

Of Note: a disastrous opening for "The Women," the Warner Bros film that had been left to gather dust on a shelf, and won new life with the success of "Sex in the City." It took in $11 million. (All I can think: more plastic surgery?)

"Righteous Kill," starring De Niro and Pacino, will take in about $17 million. The Nic Cage stinker "Bangkok Dangerous," a mere $2 million in its second week.

Will update the numbers as they come in.